Which OS X Applications do you find indispensable?

Ask Question
Asked 11 years, 3 months ago
Active 1 month ago
Viewed 46k times
180
votes
Locked. This question and its answers are locked because the question is off-topic but has historical significance. It is not currently accepting new answers or interactions.

Please Search Prior To Posting!

There are many applications already listed. In all likelihood, this includes the one you are thinking of. Please check the existing answers to avoid duplicates, and the resulting cleanup it necessitates.

To search, use the search box in the upper-right corner. To search the answers of the current question, use inquestion:this. For example:

If it hasn't already been posted, please follow a few simple rules when adding it as an answer.

A simple notes app that syncs with Simplenote--my favorite notes app for iOS.

AppFresh helps you to keep all applications, widgets, preference panes and application plugins installed on your Mac up to date.

All from one place, easy to use and fully integrated into Mac OS X. AppFresh works by checking the excellent osx.iusethis.com for new versions and lets you download and install available updates easily.

QuickCursor lets you use your favorite editor to edit text in any Mac app that has a text input field. It's particularly useful for editing textboxes on web pages.

When you move a .app to the Trash, AppTrap notices this and offers to remove all associated library and preference files.

A timer that detects when you're using the computer and tells you to take breaks if you've been at it too long. I like it because it has two timers running concurrently, one for small, frequent breaks, the other for long, rarer breaks. It's intelligent, configurable, and can show the timers on the dock icon.

TinyUmbrella is a great app for anyone who has an iOS device they want to downgrade to a previous firmware for one reason or other. It backs up and saves the SHSH blobs or "Keys" required to complete the restore.

A free, open-source Integrated Development Environment for software developers. All the tools needed to create professional desktop, enterprise, web, and mobile applications with the Java platform, as well as with C/C++, PHP, JavaScript and Groovy.

Easily configure ports, assuming you have a UPnP router.

LibreOffice is the FLOSS office suite. It's comparable to Microsoft Office while available for free. 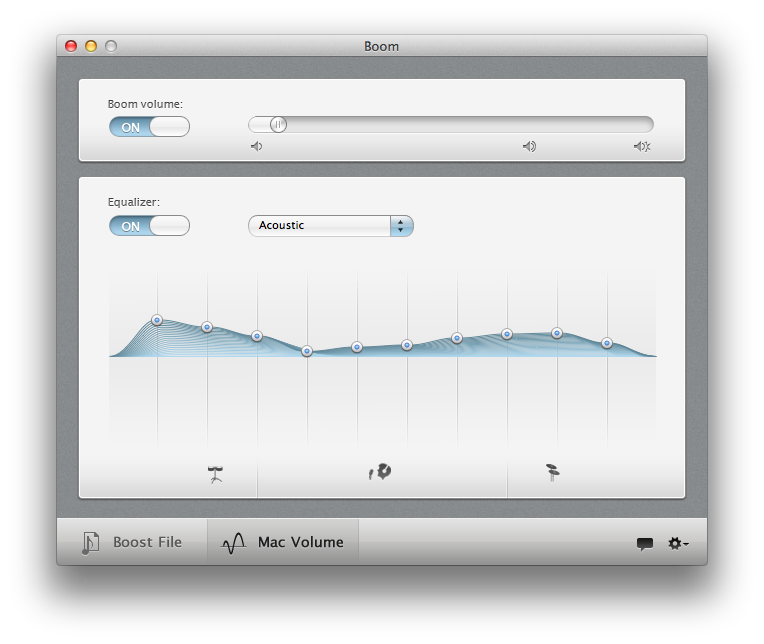 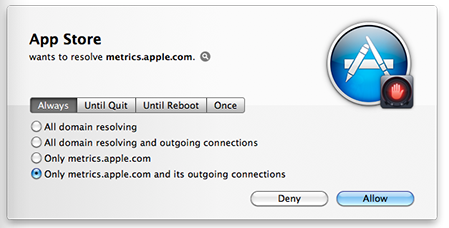 It’s my favorite dummy text / lorem ipsum generator for OS X (free). What it makes so special is the selection mechanism from the menu bar (words… sentences… paragraphs): 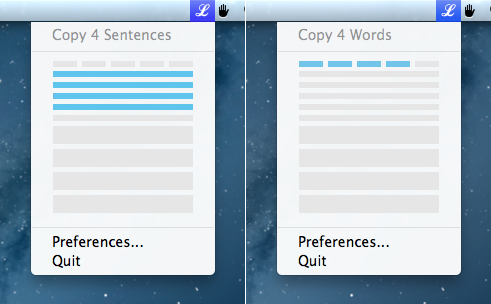 Much like Hiss, Bark forwards your Growl notifications to Notification Center in Mountain Lion. The catch though is it forwards them not as "Growl Notifications", but as notifications from the actual app that sent them, making the experience totally seamless.

Screenshots might make it more clear. I reckon Bowtie and Coda 2 don't support Notification Center natively, but with Bark this is what you get: 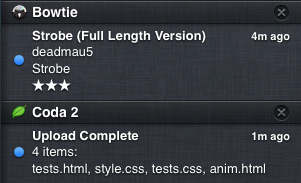 Correct icons, correct grouping, the plugin is completely free and works with the newer versions of Growl (App Store versions)... definitely worth checking out!

PS: Coda 2.0.3 I think now supports Notification Center natively, but you get the idea...

Bowtie (free) is a little app for controlling iTunes and Last FM. It comes with several features, and it's really well done. Here's a brief description from its webpage.

Bowtie is a free application that allows you to control iTunes and your iPhone (requires 99¢ companion app) with customizable shortcuts, submits your songs to Last.fm with support for Loving and Banning, and sports a very simple, yet very powerful, HTML5 + CSS + JavaScript theming system.

It's got some pretty cool "Bowlets", or little controllers/information displayers that can sit on the screen. There are plenty to choose from (these are just a few I have downloaded from the theme browser): 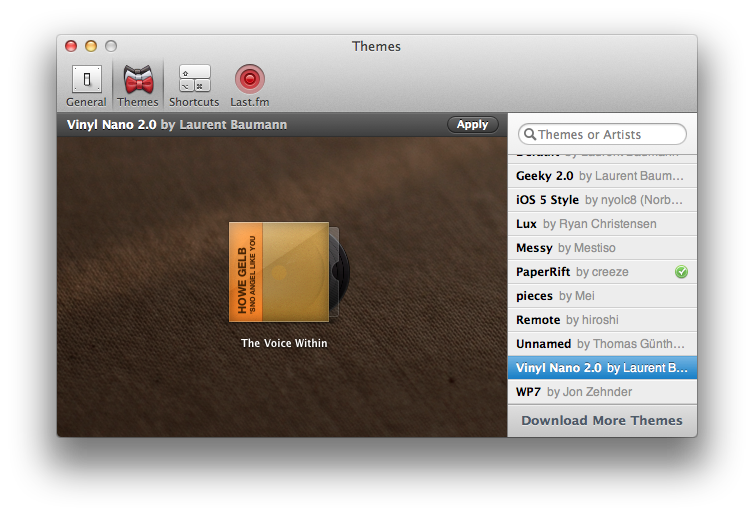 This is one of my favourite (PaperRift by creeze): 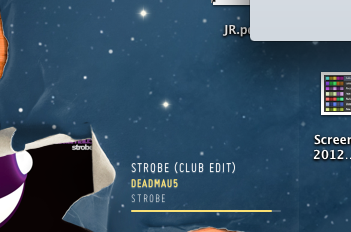 Secrets is a PrefPane that lets users access hidden settings in many Mac OS X applications. It is also open source and user driven, any user can submit a secret and have it immediately available in the Secrets for anyone to use. 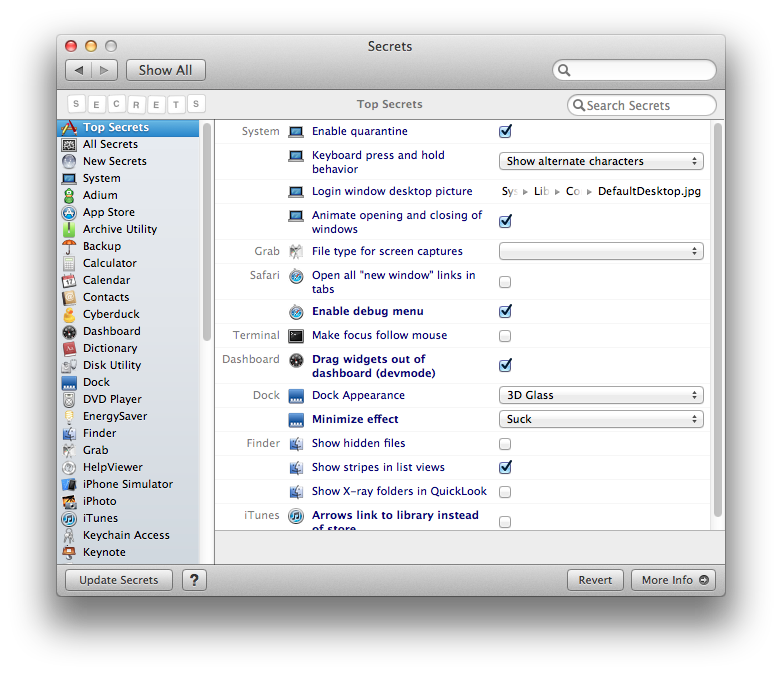 Practically every editor, including text editors, lie about the contents of files. Even programming languages change or omit certain characters. In general this is intended to help you see what they think you are looking for, but sometimes you just want to see things how they really are

Note: The original hexeditor I linked to is no longer on offer, so I have updated the link with the suggestion from neoneye

Rip is an application for accurate CD audio extraction.

It uses a smart combination of the AccurateRip database and CD Paranoia to ensure that the CD will be ripped accurately through the fastest means available.

"Rulers" allows you to create rulers on the entire screen area like most common graphic editors allow on their working areas only. The guide lines enable you to measure and position objects with precision. Rulers is incredibly useful in many fields, such as computer graphics, desktop publishing and web design. Rulers can also be used to select a screen area and take a screenshot that is automatically saved to your desktop or copied to system clipboard.

This is a great productivity app, keep your workspace clean and focussed, by hiding all the apps you are not using. No more distractions in the background!

Pull out your headphones, and iTunes pauses. Plug it back in, and it starts again. A simple application that makes your life that much easier.

Textual is a lightweight IRC client created specifically for Mac OS X. It was designed with simplicity in mind. Textual has taken the best of IRC and built it into a single client. Its easy-to-use functionality combined with scripting support makes it an ideal IRC client for novice to advanced users.

I tried Colloquy; I tried MacIrssi; I tried X-Chat Aqua; but for a GUI client, I have happily stuck to using Textual.

THL is a to-do list/GTD organizer that supports tagging, contexts, tabs, unlimited nesting, alarms, cloud syncing, keyboard shortcuts, and a ton of other features. It's a great piece of software, and comes from a developer with impeccable attention to detail. There's a companion iPhone app as well.

Pianopub is a free Pandora internet radio player for OS X. It is a port of Pianobar, so please support the original developers. It is for use with your account from the Pandora.com internet radio service.

By far the best Pandora client ever — in form of a native Mac OS X app.

Readiris 12 family quickly converts your paper documents into editable text or PDF files you can edit, share and store!

Sloth is a graphical frontend for the console tool lsof. If don't know what that is, it doesn't matter!

Sloth makes it easy to find out which applications are using which files.

Sloth displays a list of all open files and sockets in use by all the applications your user account is running on the system. This list is presented along with the names of applications using the file and their process IDs. Includes support for regex list filtering, process killing, sorting and more.

This is one truly awesome little app which is sadly not well-known. I'd even say Vox was one of the reasons I switched to Mac. Nothing but the essentials for a music player. Besides, it offers some nice audio features (e. g. resampling with antialiasing) as well as built-in Last.fm integration and nifty controls in menubar.

I prefer to organize my music in folders by artists and albums and not bother with music libraries used in most modern audio players, so Vox's ability to play all files in a folder is the single most important feature to me.

If you feel that iTunes has grown far too big for a music player or just don't like messing with audio libraries you should really give Vox a try.

ControlPlane supports multiple contexts where a context is defined as a location or activity you are performing. Using evidence sources you can create a set of rules that tell ControlPlane what context to apply to your environment. When ControlPlane enters or leaves a context a set of Actions are performed.

In other words: it will turn off screen saver protection when You arrive home and turn it back when You leave. And so much more.

0
Free utilities for a power users switching from Windows to OS X?
33
What iPhone apps can't you live without?
109
OS X Terminal "must have" utilities
29
Which are the OS X Dashboard Widgets you can't live without?
14
Looking for the ultimate IDE for Mac
16
What is the best way to discover good iPhone apps?
3
Keyboard-only folder navigation with auto complete
3
Are there any cool free 3D games on the OS X platform?
2
New harddrive, cannot sync my iPad
2
Any recommendations for a before&after software installation scanner/uninstaller?
See more linked questions

404
Got any tips or tricks for Terminal in Mac OS X?
7
Useful Chrome extensions for OS X
117
What tiny thing in iOS 5 makes you smile, or has caught you off guard?
33
What OS X tweaks, hacks, or modifications couldn't you live without?
88
What un(der)-documented features have you stumbled upon in Mountain Lion?
106
What features of Mavericks are beneficial to you?