I cannot get Mac OS X Server's web server to accept connections from other machines on the same LAN. This is on OS X 10.8.2, running on a Mac mini which originally shipped with Lion Server.

I can connect to it from the server itself, such as by going to http://localhost or http://hostname.example.com in Safari.

Notice that connecting via the box's domain name works. This is because:

That is, Apache is listening on all interfaces, not just lo.

If I telnet server 80 from a client machine while doing a packet capture on both sides, I only see repeated TCP SYN packets. (server perspective, client perspective)

Disabling the firewall in the Security and Privacy settings pane doesn't change the symptom.

The firewall configuration looks harmless to me. (Dumped via pfctl -sa.)

I'm certain the problem isn't on the client side. I've tried accessing it from:

This server is headless, and I do all my work on it from client machines on the LAN, via both SSH and VNC. This means that while I am failing to connect to this server on TCP port 80, I am successfully using it on TCP ports 22 and 5900. This behavior is what caused me to start looking at the firewall configuration. 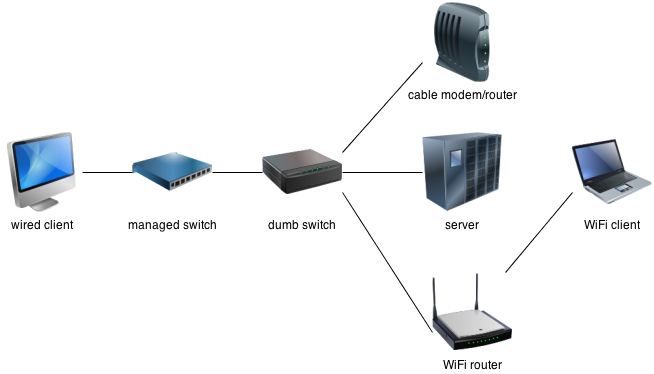 There are two network switches because this network is spread over two rooms, with one switch in each room and a single cable going between them. I ruled out the managed switch as the problem source with the WiFi test. I exonerated the dumb switch by temporarily running a long cable from the server to the managed switch.

The cable modem and the WiFi router (an AirPort Extreme) each have 4-port switches built in, but only one port on each is used, so no traffic goes through them that doesn't absolutely have to. The DHCP and caching DNS servers are turned off on both routers, since those duties are being done (successfully!) by the server in question. The AirPort is in bridging-only mode.

And yes, I've rebooted the server. And the clients. And the routers. And the switches. :)

My best guess is that the problem stems from having upgraded this box from Lion Server. If so, a complete reinstall will fix this, but that goes against all of my Unix server management training. I want to fix this server in place, if I can.

OS X actually has (at least) 3 firewalls. Since you've turned off the application firewall (in System Preferences -> Security & Privacy -> Firewall) and checked the Berkeley packet filter (pfctl -sa), I'm guessing it's the old ipfw that's doing the blocking. You can check with sudo ipfw show -- that'll list the active rules, along with counts of how many packets and bytes each one has applied to:

If your listing only shows rule #65535 (the allow rule at the end), my guess is wrong and you have to look elsewhere. If it does show other rules, you probably have a third-party firewall config program installed somewhere (I don't think the Apple-supplied ipfw config software is still there in 10.8); take a look in /Library/StartupItems and /Library/LaunchDaemons for things that might be relevant.

Open Console.app and check /var/log/appfirewall.log. You will be looking to see whether the connection request even reaches the app firewall. If it does reach there AND is allowed next check both /var/log/apache2/access_log and /var/log/apache2/error_log to see whether the request is reaching Apache. If the request is reaching Apache then the problem is likely in your Apache configuration file(s). If none of the above logs shows anything check the system.log for additional clues.

Not the answer you're looking for? Browse other questions tagged osx-server firewall webserver .

4
Figuring out what is blocking HTTP request on macOS Mojave?
3
I have a service listening on a port, how do I open the port externally?

3
Settings for Firewall and AirPort Extreme Router to Open a Port
2
How should I set up the firewall and DHCP with an AirPort Extreme and Lion Server?
0
How can I permanently suppress the firewall access prompt while developing a server program
0
Block access from WAN but not from LAN
3
I have a service listening on a port, how do I open the port externally?
9
How can I setup my mac (OS X Yosemite) as an internet gateway
0
Systems not seeing netrestore image
0
Serve Application from my Mac over LAN
4
Figuring out what is blocking HTTP request on macOS Mojave?