The iPhone 3GS hotspot works fine via Bluetooth, connected to my iPad.

If, instead, I tried it with my Macbook via USB (can't do it via Bluetooth for another reason), if I open the network preferences I can see the iPhone but it says that the cable is not connected or the device is not responding. Of course the cable IS connected and iTunes correctly sees the iPhone.

I've never tried tethering before on my macbook. I haven't tried other solutions. 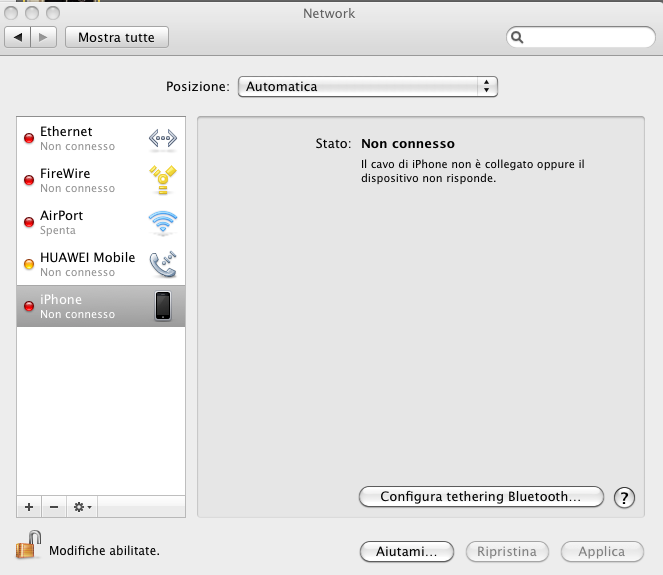 Somewhere around late 2014 is got very reliable for me. I don't know if iOS changed, OS X changed or both, but before then I continued to have the problems you describe with Mountain Lion 10.8.4 and earlier.

Of late, this has been quite solid and at worst, toggling the connection in network preferences on OS X fixes any connection issues with iOS hotspot being solid in general.

Before the fixes, the problem seems to be a timing issue.

What I've found is that if the connection light doesn't show green, I want to disconnect the device and turn off tethering on iOS. After waiting 5 seconds or so, I turn on tethering again on iOS and be sure to leave the tethering screen showing. (don't leave the settings app) I then reconnect the device and listen for it to signal that it's connected with the chirp iOS makes when connecting to a computer. If the light doesn't go green in system preferences, I toggle the Personal Hotspot off, count a few seconds and turn it on.

Occasionally, something just isn't correct on the Mac end and I switch to Wi-Fi tethering and delete the interface in System Preferences and then start over with the set up.

I wish I could say this worked reliably for me, but it seems to be fidgety and prone to errors and lock up.

Not the answer you're looking for? Browse other questions tagged ios usb iphone tethering .

10
iPhone USB Tethering Problem
1
How to Pair an iPhone 4 to an iPhone 3GS using Bluetooth
1
iPhone with personal hotspot not appearing as a network interface (USB) in the Network preference pane on OS X
1
process to reliably connect Mac Wi-Fi to iPhone personal hotspot?
31
USB tethering gone after upgrading to iOS 9 and iTunes 12.3
0
How do I make my iPad Retina wifi hotspot discoverable (tethering 3G) when off and unplugged like my iPhone 6S?
0
What is “Low Data Mode” on my iPad’s connection to my iPhone as hotspot?
1
MacBook Pro connects to iPhone and iPad hotspot, but not data