How can I get the PostScript name of a TTF font installed in OS X?

I have a True Type font installed on my Mac that I have added to an X-Code development project. For the life of me, I cannot get it to work with my application, but I think it's because I'm using the wrong font name.

Using Font Book, or any other tool, how can I get the Postscript font name from the font metadata?

I have a hunch that the Postscript name might be different from the Font name, but I need to verify.

Open the Font Book application. (It should be in your Applications folder.)

Select the font you need the Postscript Name for.

Select Show Font Info from the Preview Menu. ( Or use ⌘+i). 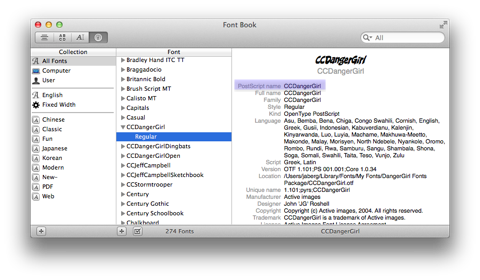 Your assumption is correct. iOS requires that you identify a font based on its Postscript name (or Fullname), which is not always the same as the font's actual Filename.

You can get the PostScript name using FontBook (as shown on the accepted answer here), but there are other ways.

Or from the terminal, from inside the directory where you have your font files, you can run this script to print all the PostScript names of the fonts inside the current directory (uses the fc-scan utility from fontconfig which is probaly already installed) (source):

Here is a screenshot of the above command running on my ~/Library/Fonts directory:

The script above will run through all the .ttf and .otf files in the current directory, then print out the PostScript Name for each font which you can use to reference the font file in XCode or elsewhere.

If you want to get fancy with some additional information (PostScriptName, Filename) and some color coding, you can run this alternative script:

This is a bit faster than copy-pasting code inside of your AppDelegate.m file to print out the names every time you want to add a new font file, which is the popular method, and it's also faster than opening the Font in FontBook to inspect the PostScript Name.

USEFUL TIP: If you alias the above script in your terminal so that all you need to do is type a single command to get all the PostScript font names for all the files in the current directory, then you will save time in your development workflow and have this handy script ready to use when you need it.

Came across a slightly different use case that I thought I should share for others:

A font file that I bought and downloaded is restricted to app use only. I usually use FontBook, like the accepted answer, to grab the PostScript name. However, because of the app use restriction I was unable to import the font into FontBook.

Drop your font file on the droppable area :

Scroll a little bit then select the "Data" tab: 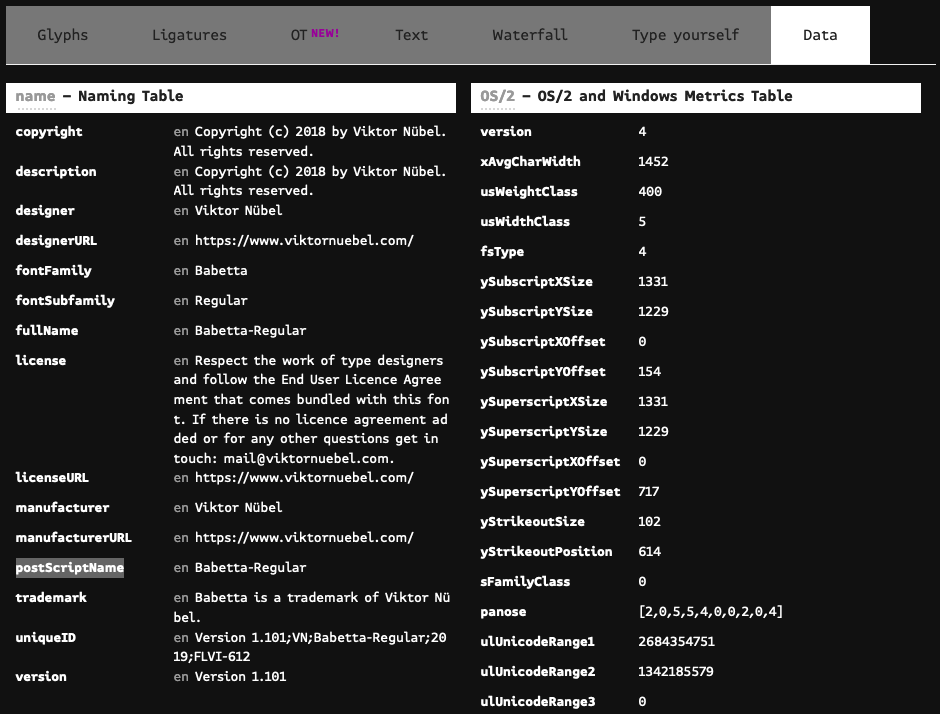 Not the answer you're looking for? Browse other questions tagged macos font .

22
How to Change default fallback font (for non-latin languages)

1
Free solution to converting PostScript type 1 font to ttf?
0
Line Height with the built in OSX Font Panel
0
Delete font library without opening Font Book OR restore Font Book completely
3
Relationship between OpenType fonts and PostScript printers, and impact on printing performance?
1
Font Book reports “serious problems” with Code 2000?
2
What is the default “cursive” font for macOS?
2
What is the difference between the different font smoothing levels on macOS?