How can I know which Wi-Fi protocol my MacBook is using?

If I have a router that supports 802.11 N, G, and B, how can I know which one of these my MacBook is currently using to connect to the router?

I'd like to see proof that it's connected using the fastest protocol available, rather than hoping everything is working correctly. For example, the N protocol may not be compatible with the MacBook (if it's an early draft), so it would use G instead. Another situation may arrise if the N protocol is disabled on the router via its settings, which would also cause G to probably be used. Thus, rather than assuming that it's using the fastest protocol, I want actual proof that shows which protocol is being used.

Try to Option+click on the wifi icon on the menu bar. You'll see a lot more information about your current wifi connection.

It looks something lijke this: 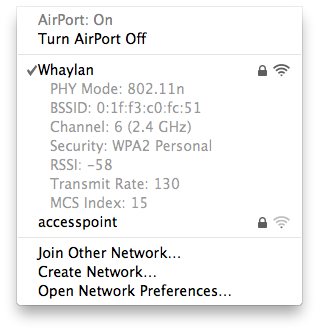 Your Airport card should default to the fastest protocol it is capable of.

12
Can a Mac's airport card run 802.11 N, G, B or A only?
0
Create a WPA hotspot
3
How can I identify the chipset of an (old) MacBook?
3
Finding an SSD that's compatible with a late 2007 MacBook?
3
Does my Macbook need “special” RAM?
0
New 2013 MacBook Air connects to routers everywhere but home, older MacBooks connect fine
5
Can Macbook Pro handle 2.4GHz and 5GHz frequencies on the same wifi network without getting dropouts?
2
802.11 physical mode in command line