View in Mac App Store button does nothing

The "View in Mac App Store" button used to work in Chrome though, I think I turned it off by mistake though, I'm not sure. The button I'm referring to is under each app's icon and looks like so: 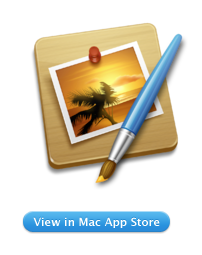 There was a popup (2) which would show a bunch of stuff about opening the App Store app or not and I think there was a check box there that I clicked to not show the popup again though, for some reason when I did this the button itself stopped working and just does nothing instead of opening the app store (if that makes sense.)

Here is example of the popup I'm talking about (this is Firefox's version, however, which is a tad bit different.) 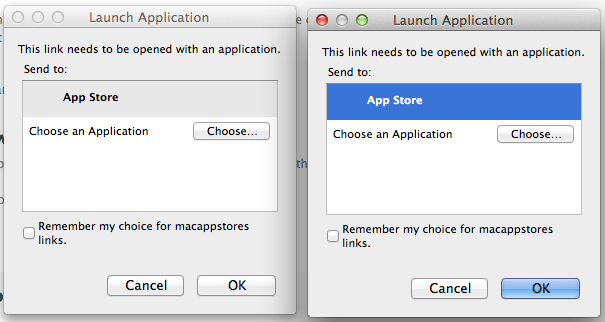 I've checked all the settings in Google Chrome itself (v24.0.1312.52) though, couldn't find anything for this and why I thought, I better ask here.

So, my questions are:

An alternative: try downloading and installing RCDefaultApp – it's a preference pane that lets you adjust protocol handlers, default apps for certain file types, etc. Once installed, go to System Preferences > Default Apps > Apps and you should see "App Store" in the list. Select that and make sure that all of the checkboxes in there (for macappstore, macappstores, etc.) are checked.

I finally uninstalled Google Chrome, downloaded a new copy and reinstalled it again. The popups show again and all is working fine now.

I still have no idea where the settings are located as they aren't in their usual places as suggested by daGUY. Anyway, that fixed it for me even though, not a very good route I will admit.

Not the answer you're looking for? Browse other questions tagged macos mac mac-appstore google-chrome .

10
Is there an alternate way to get receipts from the Mac App Store
2
Mac App Store and multiple OS partitions
0
Mac App Store updating problem
5
Upgrade from 10.9.5 to 10.10.* without App Store
4
Endless spinner when trying to update Xcode in App Store
2
How to stop Chrome from auto-opening App Store?
3
Mac App Store Xcode download stuck at "Installing"