What's the best way to test the battery life on a MacBook Air?

I just recently got a MacBook Air and noticed that its battery life is much lower than Apple's estimate of 7 hours.

For example, say I find out that my MacBook Air only holds 5 hours of battery life today. A year later, I may notice that the battery isn't holding as much power, and decide I want to benchmark it. I test it again, and find out that its still holding 5 hours of battery (it just seemed like it was holding less). So while it's less than the 7 hours promised by Apple, my battery hasn't actually degraded at all, since it matches the same benchmark I used before. Thus, there is no point of replacing its batteries.

I have several programs running in the background (BetterTouchTool, KeyRemap4MacBook, DropBox, iAntiVirus), which I expect to be running throughout my MacBooks life. Do you think that when performing these battery benchmarks I should quit these applications or leave them running? My guess is that I should quit as many applications as possible to reduce the chance that one of them won't behave exactly the same between benchmarks.

Ideally I want the benchmark to not last a long time so that I don't waste time benchmarking, however, at the same time, I don't want to overheat the battery which could cause permanent damage.

Ideally the benchmark should not require me to be present at the computer and use it constantly (this would mean that I would need to temporarily disable the sleep timers), since then it wouldn't actually reflect a reproducible benchmark (e.g. if I need to use Facebook for 5 hours constantly during each benchmark, its VERY unlikely that I will do the exact same thing during both benchmarks... not to mention that Facebook's code a year later may be less or more efficient, causing more or less battery usage). Thus, I'm thinking an automated program which keeps using the battery at a consistent rate would be the best tool for the job.

Do you have any suggestions for things that might help perform these kind of benchmarks?

Actually, an Apple battery gives you the percentage of its original capacity that it currently has. You can access that number through the free CoconutBattery app.

If you want to do your own benchmark, I recommend using BOINC and supporting a grid computing project, like SETI@home. These basically use 100% of your CPU from the moment you turn the program on until the moment you turn it off. This drains the battery pretty quick. Just be careful to check temperatures to make sure the computer doesn't overheat, especially with a MacBook Air. You probably should quit extra apps, but it shouldn't matter too much.

I just found out that there's a related feature in OS X called "Battery conditions".

It's supposed to let you know when your battery is no longer holding as much charge is it originally could. You can access the feature by ⌥-clicking on the battery icon in the menu bar.

You can also check out Watts which will help you calibrate your battery.

Let me know how it's going on!

Rob Griffiths (@rgriff on Twitter) just tested the battery life of his 11" Air. He'd be a good person to ask about testing yours.

Please feel free to downvote my answer because I'm not really answering the question. I guess a mod could just delete this.

Instead, I have an axe to grid with Apple's battery life claims. Their seven hour claim is based on a default install of Max OS X on your MBA and a single instance of Safari browsing the internet over WiFi, looking at web pages that are mostly text (read few images and NO FLASH!).

Who does that? Who cares? If you do that, you're battery will last a long time...

This is similar to car manufacturer MPG ratings, fast food "restaurant" pictures of their products and walkie-talkie range claims. That is, in PERFECT conditions, things are awesome! Otherwise, caveat emptor.

Good luck and sorry for the rant :-) 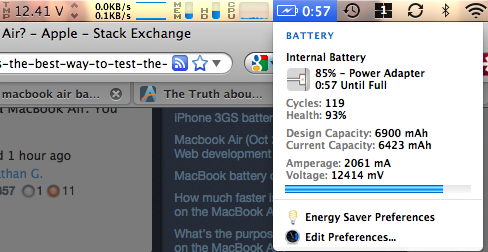