In Mac OS X 10.8.2, I have this curious problem. Every time I install a new updated version of one of several applications that I use, my system adds a new duplicate entry in the "Open With" contextual menu: 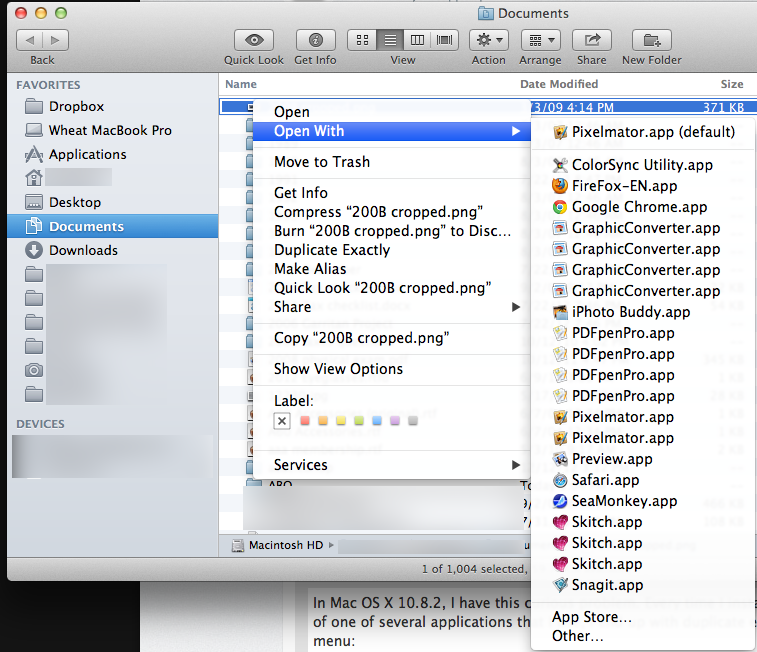 I have tried clearing caches and rebuilding disk permissions and rebooting, but the problem persists.

I have also deleted and rebuilt Spotlight and then rebuilt Launch Services and cleared caches again.

Nothing has any effect.

It seems there have been similar questions posted here before, and all of them are incorrectly answered by "Rebuild the Launch Services database" but that does not help the problem.

After filing a bug report with Apple, I have received a notification that this is a known bug that they are already tracking and working on. It is Bug ID# 11582257, for anybody who follows these things.

I have found a Terminal command that works in Mountain Lion. It gives the correct sequence of commands for lsregister to correct this problem:

This was provided by one Dr. Drang on the blog at LeanCrew.com in a post called Getting rid of Open With duplicates. It was posted on February 16, 2013.

You can read the blog post at the link above for all the details.

Presumably, until Apple fixes this known bug, it may be necessary to re-run this command every time a new version of an app gets installed on my system, causing new duplicate items in the Open With menu.

I must admit that this string was suggested by bmike on January 12, 2013. But for some reason I overlooked it earlier. So thanks, bmike.

Do check Wheat's answer where he discovered the circumstances where OS X has a bug and the duplicates are caused by updating an App from the App Store.

For others where this isn't caused by a specific bug in Mountain Lion, the rebuilding has ruled out a stale launch services database, you should now rebuild your entire spotlight database.

This assumes you don't really have several copies of PDFPenPro - so you might run mdfind app_name before and after rebuilding spotlight since that is the likely cause of duplicate entries.

This might also be a good time to be sure your backups are current - random filesystem errors, incompatible utilities, or impending disk failure also could explain the database continuing to get rebuilt with duplicate entries.

This has happened to me occasionally, but when it did, it was because there actually were two versions of the app installed. And so (in this case) the fix is to find and delete one of them.

How did I get two copies?  I consider this a bug, but some might disagree. I have a directory called /Application/Non-Apple where I put any apps that aren't built/maintained by Apple (even though they come from the App Store). Most apps update to /Applications instead of to the actual location of the app. Result: the newest version is in /Applications, both versions are in the open with menu, and the Dock still points to the old version.

It doesn't have to be this way (and it shouldn't). I know better behavior is possible because I have two apps that update to the same path as the existing (previous) version.

51
How can I modify the list of Applications under 'Open With...'?
50
How do I remove duplicate "Open With" context menu items in Finder.app?
12
How to search LaTeX -documents in Spotlight?
9
Why is there a duplicate entry for my TextMate?
6
How to fix lsregister failing associations after reboot?
6
How do I fix duplicate 'Open with...' options?
4
"Open with" in Finder.app gives duplicate entries
1
Is Chromium installed on my Mac or not?