During playback (approximately 20 times per song) it stutters, stops playing for a few seconds, and then resumes from where it left off. It seems to co-incide with my using the keyboard or performing any file operations - and at the same time the file operations freeze up. The following screenshot was taken about 3 seconds after a skip and doesn't show any signficant CPU activity: 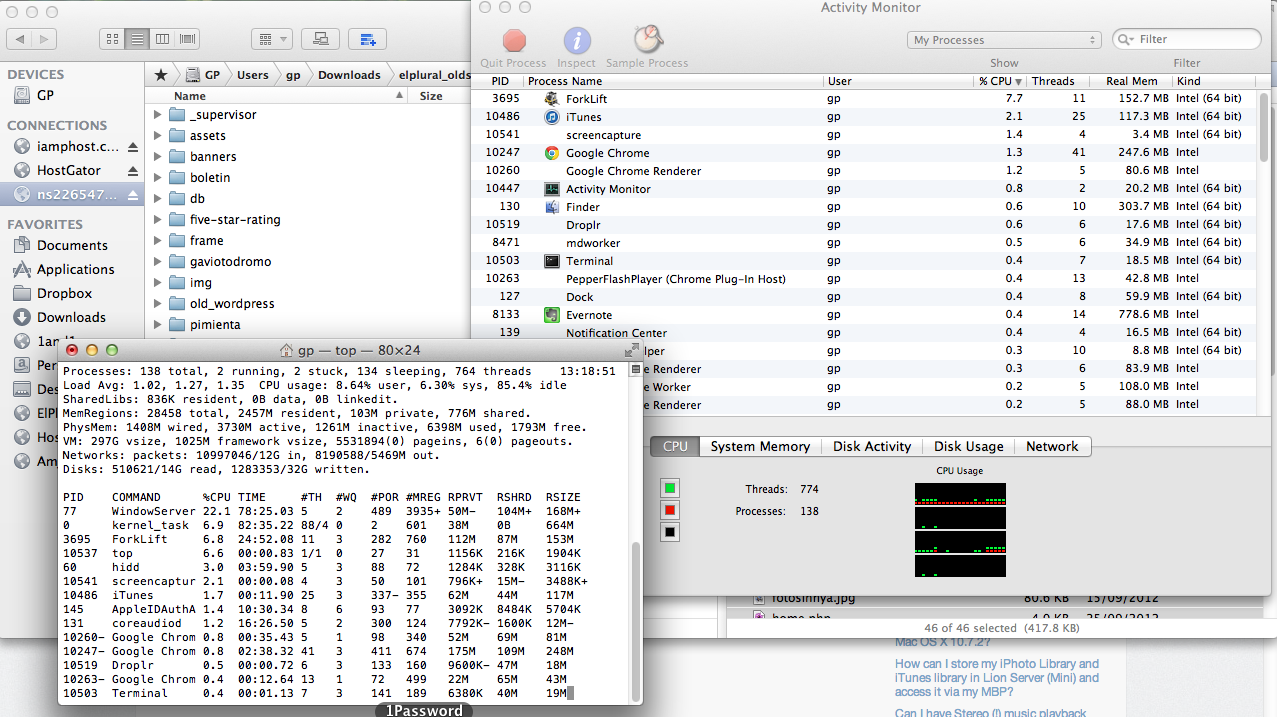 However, if I close iTunes, I get no problems with file operations, or any other app on my machine - leading me to believe that iTunes is causing the problem. Has anyone else run into anything similar, or have any advice on stopping iTunes being such a resource hog?

Note: Other apps (for instance VLC) have no problem with playback under the same conditions.

Buried deep in the comments are these answers to solve the riddle of the stuttering iTunes playback on Mountain Lion:

I've just remembered that I have FileVault enabled, and as the crashes / skips happen when the computer is performing file ops, I think turning FV off might help - decryping my hard drive now... – George Pearce Jan 12 at 14:34

Update: Turning off filevault and decrypting my hard drive appears to have entirely solved the problem. – George Pearce Jan 12 at 19:20

I have the same issue on Windows since upgrading to version 11. My guess is that the application does not buffer as well as it used to - so a load on the system causes playback stutter.

A workaround that seems to work is to run iTunes as a high priority process. This can be achieved on Windows 8 via the task manager ("Details" tab) or by changing the iTunes shortcut to be:

Use an external audio player like Amarra to take control of the buffer and playback and see if this helps. Amarra has settings for how much of a track to buffer before playing

You're sure these are not songs that are coming from the cloud?

Turn OFF "Put hard disks to sleep when possible" in Energy Saver Settings!

Not the answer you're looking for? Browse other questions tagged macos itunes macbook-pro .

3
Since upgrading to version 10.0.1 of iTunes, playback is bumpy
0
iTunes on iMac plays media on Linux server via SMB. What's with the slow imports, changes and stalls?
3
Aperture and iTunes freezing, bringing down Snow Leopard entirely
1
How do I convince iTunes to play a podcast item I've manually replaced
3
iTunes intermittent freeze/crash: how can I diagnose the problem?
1
Standby during playback since iTunes 11
0
Apple TV (headless) + Home Sharing + Remote stops playback after one song
4
Yosemite freezing/lagging constantly on 13" MacBook Pro (Mid 2012)
11
How can I isolate macOS 10.14.6 Mojave freezing 1-2 seconds every few minutes except for sound and the mouse?