What causes a Mac to lose its serial number?

I upgrade my brand new late 2012 Mac Mini's drive to an SSD and changed the RAM. Now when looking up the serial number in "About this mac" or System Profiler it just says "System serial#" : 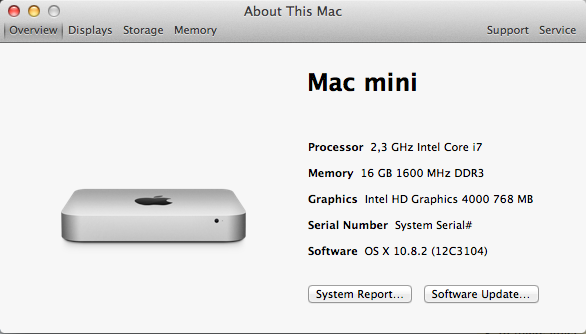 The Mini also performed an OS and EFI update before I noticed the problem. I cannot log in to iMessages and posts an the 'net lead me to believe the non-present serial number may be at fault.

Already tried PRAM reset. Can it be easily reinstated or otherwise fixed ?

The only deleterious effect seems to be the inability to log in to Messages with my AppleID. [Earlier edit of this question referenced being unable to download Mountain Lion from the App Store, this issue turned out to be unrelated.]

Apple Support sent a new machine and replacing RAM and SSD did not cause a repeat of the problem. This machine is able to log in to Messsages.

A lack of a visible serial number should not affect your Mac.

The technical note suggests the serial number can vanish if hardware components are changed. Other reasons appear to be possible but Apple does not enumerate every cause:

Caveats for using the serial number

It is possible for a system to lose its serial number so that it will no longer appear either in System Profiler or the I/O Registry. Repairing a system by swapping hardware components is one reason this can happen. Apple does not document the specific details of how a machine can lose its serial number. Once the serial number has been lost there is no means to restore it to the machine.

Apple does not guarantee that all future systems will have a software-readable serial number.

Both of these cases illustrate why asset tracking software should always provide a way for a serial number to be entered manually.

I am not aware of any further documentation about restoring the serial number. If it is possible, this capability is likely to only be available to Apple engineers or support staff.

TUAW has an article on this problem, the author had his logic board replaced and apple did not reset the serial number. In essence he did software trouble shooting, reinstalled the os.... at some point he realized he did not have his serial number. As per a comment Apple or an authorize service providers have software that is able to reapply serial numbers and he was able to connect with messages. The link to the story is below.

My girlfriend's 2009 white MacBook lost it's serial number after upgrading to OS X El Capitan. Didn't realise this until it refused to log in to iCloud, AppStore etc. and started digging around.

I can say that even though Apple won't admit or explain why this happens, I know every change made to this machine. After 4 months the keyboard became buggy and would randomly lock the RETURN key in repeat. They changed the logic board under warranty and it's been fine since. I suspect this is the cause.

I have added more RAM myself (Approved Kingston RAM, but not from Apple), and I've recently replaced the HDD with an SSD. However I have done this to several different macs without issues, so I suspect that the logic board replacement was the cause.

What was worse? We had the rubber base replaced under warranty (Apple admitted there were manufacturing issues where it would start to peel off) but of course the replacement base was without a serial number printed on it! By a stroke of luck and several hours of searching I found the support case online for the machine and luckily the serial number was registered there! Phew - we almost lost a perfectly good Mac's ability to use iCloud/App Store to this issue! And with no serial on the machine (and probably the wrong one/none on the new logic board) Apple had kind of screwed us there. I'm going to rewrite the serial number to the firmware tonight and cross my fingers that it works!

UPDATE Blank Board Serializer did the job. Burned to a CD and booted, entered the correct Serial Number, and now iCloud, App Store etc. all logs in correctly.

The logic board should carry the serial number, so the logical and most likely conclusion would be software corruption or perhaps a failure of the logic board.

Check in terminal to see if the system information is truly missing:

Towards the end of this listing should be a serial number field. Based on this result, you might reinstall the OS (if the serial shows under this command) - and even if this serial were missing, I might still try a reinstallation before taking it in for service. If you are close to a free service like a Genius Bar, you might stop in with the Mini (no need for cables) and ask if they can have a brief look. They'll tell you if you need to remove the RAM/HD or if they can determine the issue / quote a possible repair if it's not software.

The more I think about this, I wonder if the Mac ever had a serial number written to the logic board. I would open a support case (worldwide contact for Apple support here) and get it on the record as needing repair even if you aren't keen to send it in now. The sooner you report something, the more options you have.

Normally, nothing ever fails since most software never reads the number, but it would be nice to have everything working on a Machine that is still under the one year warranty.

bmike♦bmike
213k7474 gold badges376376 silver badges817817 bronze badges
5
Add a comment  |
0
Want to improve this post? Provide detailed answers to this question, including citations and an explanation of why your answer is correct. Answers without enough detail may be edited or deleted.

Use Blank Board Serializer

See http://rogersm.net/icloud-problems-mountain-lion-serial-number for a solution.

Not the answer you're looking for? Browse other questions tagged macos hardware upgrade serial-number .

9
No version model of Macbook in 'About This Mac' section
5
Macbook Pro 11,3 No longer has a serial number
3
MacBook Pro Serial Number Not Available