Why does my recent calls list have entries from the future?

My iPhone's recent calls list correctly shows all the calls I've made or recieved, but some of them apparently have timestamps from the future: 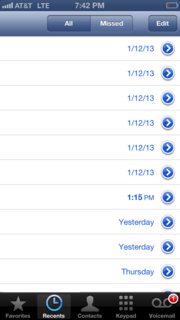 This screenshot was taken on Jan 7th. The call labelled "1:15 PM" was made that day. The ones at the top of the list, labelled 1/12/13, were actually made sometime the previous week.

I was messing around with the phone's date and time in response to the Do Not Disturb bug. I had switched "Set time automatically" off, and changed the phone's date manually -- probably to 1/12 though I don't recall exactly -- and left it that way (actually forgot about it) for a while. My phone's time was definitely manually set incorrectly when those calls happened, and that seems pretty likely to be the cause.

I suspect that the answer is "No", but is there any way to correct these records?

I've tried restarting the phone and monkeying around with the date and time again manually, but there's been no change to the list.

Unfortunately, there's no way to change the Recent calls timestamps.

You will either have to wait past the 1/12/13 or you could consider deleting those numbers. Course, you would obviously lose the phone numbers, and that data, but it would keep your true recent calls on top before it starts working again on 1/12/13.

It appears to be indeed changing time on the iPhone that has caused this issue, as I was able to repeat it easily. In testing it, I switched off "automatic" time, and change the date to tomorrow. After that, I made a phone call and then changed it back to set the time automatically. The phone call that I made during the manual time change indicated that I made the call tomorrow. 1/10/13, in this case.

So, your iPhone uses local time - the time that displays on the phone at the top of the screen - to log, order, and display recent calls.

Not the answer you're looking for? Browse other questions tagged iphone ios call .

4
iPhone EXIF/GPS Timestamp - Appears to be based on local settings?
1
How can I activate iPhone without a SIM card?
1
Why am I notified about some missed calls via a text from +8888?
1
iPhone recent calls list reappears after clear
2
iPhones and automatic 911 calls
2
Skype texting on iPhone no longer makes any sounds at all
1
How does my brand new iPhone have steps activity recorded on it (in the Health app) from a month ago?