Anyone able to connect gioteck VX-1 (PS3 controller) via Bluetooth?

I have a Sony DUALSHOCK 3 SIXAXIS controller, I can use it as a USB controller on my OS X Mountain Lion MacMini and it works perfectly. I have it set up in Bluetooth so that when it is not connected via USB, I just press the Playstation Logo and it connects instantly via Bluetooth. In my humble opinion, Sony DUALSHOCK 3 SIXAXIS controllers are overpriced, so I bought a gioteck PS3 VX-1 Wireless Controller for $29.99. It is identical in every way to the Sony controller except the shape and that it doesn't come with a lithium ion battery and instead takes two AA batteries or a battery pack like the ones you put in an XBox 360 controller. The "Cheap" controller works identical to the Sony controller when connected via USB.

My goal here is to play four player games with the whole family without spending nearly $200 on PS3 controllers.

Here are all the details I have:

The one that works: 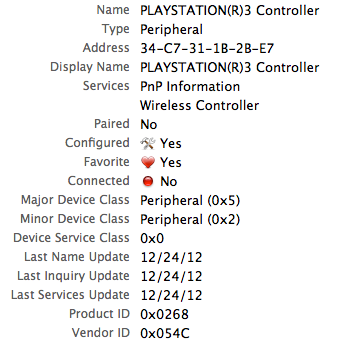 The one that doesn't work: 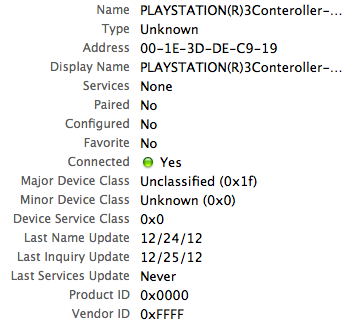 Ok, I got it to work. I would not recommend using this technique, but it works, I hope someone posts a better solution.

THE SECTION REFERENCED IN STEP 1 ABOVE:

Any time you stop using the controller, disconnect it via System Preferences->Bluetooth or hold the Playstation logo button for 10 seconds to power it off.