Can one still sort By Album By Year in any of the views in iTunes 11?

In previous versions of iTunes, it was possible to sort songs by Artist, and then by Album By Year, so that albums would be shown in the order they were released, rather than alphabetical order.

I can't find a way to replicate this behaviour in any of the various views in iTunes 11: In the Songs view, I can only sort by a single column, and in the other views where songs are grouped by albums, the albums are always displayed in alphabetical order.

Is there an option I'm missing, or is sorting by Album By Year no longer an option?

While in the albums view go to the view menu and select viewing options (command+j) and choose sort by year.

Here is a screenshot (in german but I hope you get the important points). 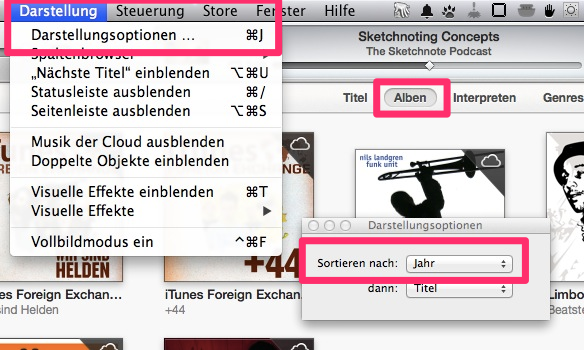 Then select "sort albums by year" in the popup.

4
How do I get iTunes to play the albums of an artist chronologically?
5
Properly sort multiple albums from one artist in a year in iTunes
1
How to sort albums in years and artists
4
How can I get my albums to sort by track numbers in iTunes 11's expanded view?
9
How to get iTunes 11 to Group by Album Name
0
Sort order tiebreaker for "Album by Artist"
3
How can I get iTunes 11.1 to list songs by album and show cover art
1
How can I view recently added songs in iTunes grouped by Album like the Songs view does?
0
How can I make soundtracks with one artist sort as soundtracks in iTunes (and iPhone)?
1
iTunes starting playlist in different order than view