Why can't I restore apps to iPhone 5 from 4s?

I recently upgraded from an iPhone 4s to iPhone 5. How do I transfer all my apps to the new iPhone 5? I have tried two times without success:

This transferred all my contacts, call history, messages, and photos but all my 3rd party apps were missing. (Also messages I had received on the iPhone 5 before restoring were over-written... any way to prevent this?) The size of the resulting backup files was only 10GB; about the amount of photos and videos on my 4s. Note: I can view the list of my purchased 3rd party apps from the app store and download/install them one at a time. When I re-install the apps, they retain all their old data and even old icon locations.

This time, the backup size was about 20GB. However, still no 3rd party apps were transferred except a few apps I had re-installed since the last restore.

When I view my apps on the 4s from iTunes (version 11.0.1.12) I see one significant difference from most on-line instructions. Although 99 apps are visible on the right, I am unable to select any of them because they are not listed on the left: 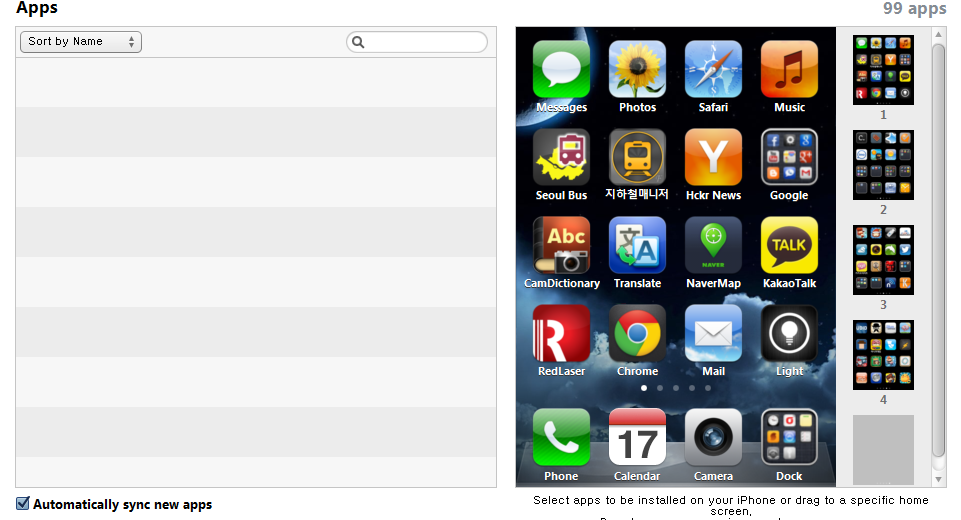 Also, at the end of the restore, the iPhone 5 seems to reboot automatically. However, after waiting for a long time, nothing happened so I restarted the phone manually.

So how do I make a truly full backup of my iPhone 4s and fully restore it on my iPhone 5?

I had the same issue (I use iTunes on Windows 7). I Bought a new iPhone 5 and used the Backup / Restore method to move my stuff from the old iPhone 4S to the new one. The process only restored all the Apple apps, plus Contacts, Phone Calls, and Messages. When I tried to backup again - hoping it would restore the rest - it went through a restore process in iTunes (for about 5 minutes) and then I got the message that my iPhone will restart but never did (I had to restart it manually).

What I also noticed was that, when I retried, the Backup seemed to be very quick.

I called Apple Support who said that there is a problem with the Backup process. I would be able to restore my Apps via the Purchased Apps process but I would lose all my user data (such as games progress). I was extremely frustrated because I use my iPhone and iPad as tools, not game devices.

I went to the App Store on the iPhone and started downloading some of the Purchased apps from the what seemed to be the iCloud. To my surprise, all app data was there (eg. WhatsApp chats, and The Vault data). I am not sure how this works because I never deliberatelly setup app backup on the cloud, but I suspect that the "Documents and Data" == "On" setting on Settings --> iCloud does exactly that, and in return does not include this information on the PC backup.

All seems fine now (at least for the apps for which I care and tried). The issue I still have is this uncertainty on what exactly is my iPhone doing and where is my stuff at any point in time.

Just a guess into the wild... All the apps you are trying to install have to be present on the source you want to sync from, which usually is either iTunes or iCloud. A backup usually does not contain content from the App-Store (like apps etc...)

This is what worked for me after some trial and error on iTunes 11: select "File" -> "Devices" -> "Transfer purchases from myPhone" from the menu bar. Then all your missing apps are transfered to your computer. After it is done you might want to refresh the backup of your phone, by clicking on "backup now" on the summary page of your phone. After that you should be able to setup your new phone with all the data from your old device. (Maybe reset the new iPhone first by deleting all the content on it via the settings app)

Apps purchased are not contained in the backup, therefore they will not restore. They can be found in your iTunes, under apps purchased and can be downloaded again to your device. Appdata however is found in the backup - it can be extracted with software such as iPhone Backup Extractor, and then imported back to the device. Hope this helps!

I believe the problem is in iTunes 11. I found, that on the Apps tab there is now missing "Sync Apps" checkbox. They believe, they have replaced this with iCloud. But only partially. If you would install applications you would find, that the data has been synced.

I have solved this by using my old PC with iTunes 10.7. I had to run the restore from my 3GS backup twice. I have wiped all data and settings and restored backup. This installed applications but not all settings (background I guess) and application order was preserved. Thank I have connected the iPhone again and restored again (but without wiping the data). Now my iPhone 5 has all the applications in correct folders with all its data. Strange restarts not corresponding to the instructions from iTunes were experienced too.

The iOS version shouldn't matter, but I would Erase All Content and Settings and restore from iCloud and transfer the rest of your content from iTunes.

I had the same issue, but found a TRICK/Solution.

THIS ONLY HAPPENS WHEN YOU BUY A USED PHONE WITH PREVIOUS USER'S APPS ON IT.

1) FOR Factory Unlocked phones> If you had bought a Used Iphone , then the first thing to do is to do a MASTER Reset and then do a fresh start , once you go on the screen where it says Startup as a new phone OR Restore from backup . just simply click restore from back and every single thing will be restored to your phone as its with all APPS, and DATA ..

2) FOR GEVEY SIM/ RIM SIM UNLOCKED PHONES > If you are using a Gevey sim or RIM uncloked sim cards to unlcock your phone and are scared to do the Master reset of the phone in order to lose the UNCLOCK OR SCARED OF THE ACTIVATION ISSUE , then you can still get all you Apps back on the phone. just do this ..

Go on itunes and fist try doing the restore from your backup . Hopefully every thing will be backedup but NOT APPS .. now the problem is ,, your Itnues account on phone is conflicting with the APPS OF THE PREVIOUS USER ..the only solution is to DELETE ALL THE APPS FROM THE PREVIOUS USER... if you dont know which apps to delete .. just click on the itnues tab and look for Devices. under devices click on Transfer purchases. when you do that. An error message will show saying ETC ETC , apps are not going to transfer. (THESE ARE THE APPS WHICH WERE DOWNLOADED BY THE OTHER USER) so just click on show details , it will show you the list of apps need to be deleted. Now go on your iphone and simply delete the apps. and boom .. now click on sync apps and it will sync all your apps back on your iphone.

Let me know if that helps thank you!

Not the answer you're looking for? Browse other questions tagged itunes applications restore iphone .

3
After upgrading to iOS 5, how to restore my apps?

4
iPhone 4s 3rd Party Apps not working
5
Can't restore music to iPhone from iTunes
3
Restore previous apps after upgrade to 4.2?
2
For my iPhone, why is the "restore from backup" option not available in iTunes?
4
iPhone 6 restored from encrypted iPhone 5S backup doesn't retain passwords
2
Issues & Errors with Restore from ios7 Backup to ios9 on iPhone 5?
3
Restore from Backup: Apps in iTunes library were not installed on iPhone because Unknown Error occurred 0xE800002D
0
Why my iPhone 6s restore application and its user data by Internet even when I backup them by iTune?
0
New iPhone 8 restore not showing sms messages
2
Undo iPhone restore from backup