I've had a problem with my Wi-Fi connection to a TP-Link router from MacBook Air. It has been solved by manually changing Wi-Fi channel on the router from "Automatic" to an average value.

What channel ranges do MacBook Air's Wi-Fi NICs support? Is there a way to tweak it to a required channel not visible by default?

P.S. My country is Ukraine and my router does have this value set.

The manuals for all Air are stored online at http://support.apple.com/manuals/#macbookair and it looks like the latest Air is certified under the EU and Russia - but I don't see a good way to know precisely which channels are supported from a pre-sales or reference.

You can however, open your System Information utility and select Wi-Fi. It should show you the current Locale, Country Code and supported channels for your network adapter. 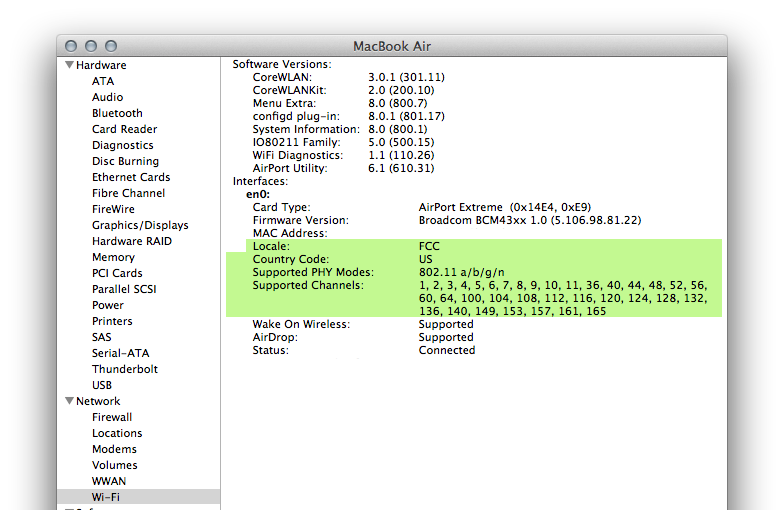 I ran into a problem not seeing WiFi routers in Europe with my late 2008 Macbook. I originally read some posts saying that U.S. models' hardware only supported the U.S. WiFi channels, but later found this was not necessarily true.

It turns out my laptop's WiFI does support (at least) European channels (e.g. 12 & 13) that are not supported in the U.S. Interestingly, the way to enable usage of the proper channels (at least in Snow Leopard) was to change the region (System Preferences -> Language & Text -> Region). (That preference displays a note: "Changing the region may affect the availability of Internet services." This seems to confirm the notion that a certain region would not let the computer see channels supported in another region.) You can use the "System Information" tool to confirm the effects of the region selection on the network adapter .

Most of the routers I have used while in Europe have the WiFi channel selection set to "Auto", and interestingly, most of the time, the routers were using channel 13, so my laptop was not seeing the WiFi station until I figured this out.