I installed iStat Menus, and the fans start when the highest temperature has been 50C, but like now it is 70C and the fans aren't above normal (cant hear them).

This graph below shows part of watching a 1080p movie, the middle is the Fan speed, the top and bottom are the CPU and GPU. 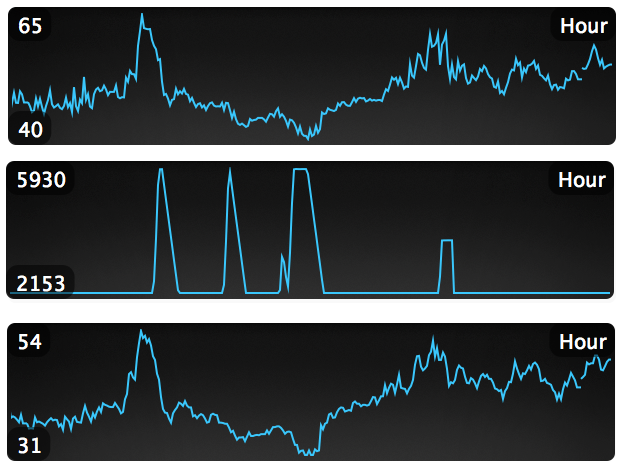 What is the typical temperature for a retina MacBook Pro? 70C (CPU Die) seems very high for only browsing the web?

This is my 3rd rMBP, and the other 2 have only ever turned the fans on while playing Civilisation V on the highest graphics settings (understandable). So this makes me thing something is wrong. I've tried resetting the SMC and it has reduced the number of times the fans turn on, but still they turn on at low temperatures.

Also do the fans turn on based on temperature, or based on something else?

(Also I've actually swapped the machine 4 times at the Apple Store (display issues), and the Manager told me this is the last time I can do that, so is there anything I can do without going to the Apple Store, like email someone at Apple?)

the fans aren't above normal (cant hear them)

That's due to the new asymmetric fan blade spacing apparently spreads the noise across a higher range of frequencies. source: http://appleinsider.com/articles/12/12/20/patent-filings-detail-retina-macbook-pros-quiet-asymmetric-fans

I think those high temps are normal for the MBP Retina ... lots of people are complaining about it. My 15" Retina MBP doesn't increase the fan speed until I render a HUUUUGE 3D komposition in After Effects, and even then the fans are not getting at full speed. So I took it to a Store and they tested it and everything seems to be OK. So i guess we just have to get used to those high temps ... whatsoever I use smcFanControl as an alternative to the MBP's fan control.