I keep having huge lag spikes, anyone have a clue?

The first lag spike is only caused by Google Chrome or Firefox, I suppose it's a memory leak. It affects the whole computer too. And it can last as long as half an hour (probably more if I let it). What's funny is that it always gets fixed if I do the following: 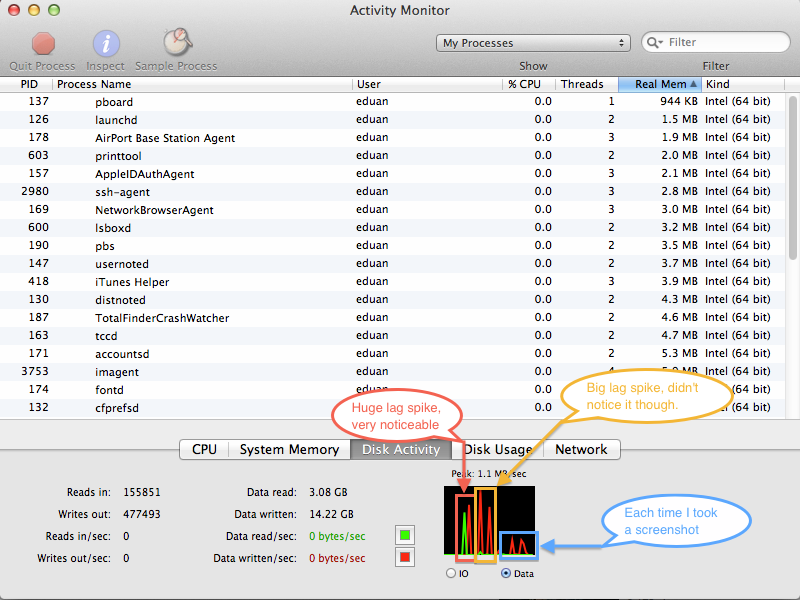 The second lag spike in the image was caused when I opened the Activity Monitor, it lasted around 10 seconds, it was almost unnoticeable, and I think it was caused mainly because I force quit Firefox at this point.

The third and later small lag spikes were caused when I took several screenshots to do this.

So the question is, why are these huge lag spikes generated? Before clossing Firefox I noticed it was using 1GB of RAM, the whole computer was probably using 2GBs RAM max, and yet I have 8GBs of RAM.

Also, I do NOT want to restart my computer, not because I'll lose anything, but rather because it's probably I'll have to reinstall my system if I do (I keep getting this loading screen, then it shuts down).

If you can provide any help as to why this might happen, I would appreciate it, especially the second problem, I've tried everything.

3
OS X keeps rebooting by itself