How can you send the same text to multiple people without it being a group message?

I want to send "Happy Thanksgiving!" to 35 different people, but I do not want it to be treated as a group message. How can this be accomplished on the iPhone 4S (with or without jailbreak applications, such as biteSMS) with iOS 5.1.1?

The reasons that I would not want it treated as a group message are:

Optimally, the solution would also allow pictures to be attached and would automatically send iMessages instead of text messages to iOS users - but those parts are less important than being able to send plain text messages.

The option you're looking for is located at Settings > Messages > Group Messaging. Turning this off will send all messages individually to their recipients.

Note: Disabling MMS Messaging will remove the Group Messaging toggle from the list. 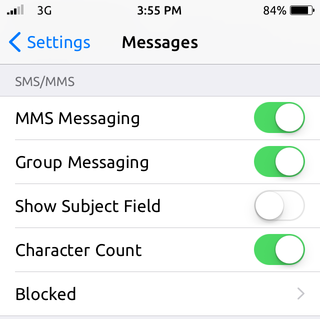 If you have a Mac you can use https://porterhouse.app which lets you do that with a single click, and sends as iMessage to iOS users too

Not the answer you're looking for? Browse other questions tagged iphone jailbreak messages .

1
How to text, as a blind carbon copy, multiple phone numbers at once?

3
Problems with Group SMS
2
Why do I get my own text message sent back to me in a group message on iphone 5S?
1
How can I send message as Text Message on purpose?
0
Why doesn't my name show when I send a text message?
1
Send a new text without all the history for that recipient
10
How do I force send a text message in iOS 10?
3
Sending same text to many people, nobody sees other recipients
12
How do I send text messages (NOT iMessages) from my Mac?