How to make windows of new folders open in my size?

In OS X 10.8.2, I create a new folder by right-clicking in the Finder and selecting New Folder. When I open this folder, the size of the window is not the size of the foremost window. The window size inherited by the new folder is always the system default window size, and apparently can not be changed by any means.

Is there a preference, possibly through Terminal, to have the windows of newly created folders open in my preferred window size?

I mostly use column view and have removed all folders except the home folder from favorites, so the root folder of most windows is ~ or /. When the default dimensions or view options for them change, I reset them by running this script with FastScripts.

FinderMinder watches what windows you open and changes their dimensions. The windows appear at the previous position for a split second though. 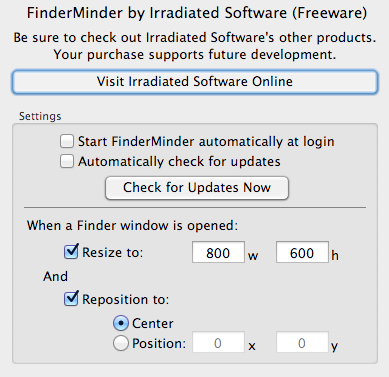 I finally came up with a nearly perfect solution based on Lauri Ranta’s script.

In Service Preferences I activated “create new folder”, and assigned the keystroke Cmd-Shift-M.

Keying Cmd-Shift-M in the Finder now creates a new folder with the characteristics set up in the AppleScript.

I could assign Cmd-Shift-N in Service Preferences to “create new folder”, but it did not replace the OS X default action of Cmd-Shift-N.

I like to hear from anybody who can get Cmd-Shift-N to work with “create new folder”.

Not the answer you're looking for? Browse other questions tagged macos finder folders customization .

14
Make folders opened by external apps open in a new finder tab rather than a window
6
How do I open folders in new windows/tabs by default in the Finder in 10.9?
1
Can you disable toolbar by default in Finder?
4
How to set default Finder window size for *all* situations?
0
Open new folder window in Finder El Capitan - instead of same window
4
AppleScript: How to create a new Finder window for a folder that is already open?
0
right click creates new finder window at click location