What should I do when Apple Support fails to diagnose iPad 3G Failure?

I got an iPad back in June 2010 and it worked wonderfully for about 30 days; full bars for 3G all the time. I loved it. Then one day the 3G just seemed to quit working and Apple says it is "fine." Now I hate it!

How can I get Apple to admit my iPad 3G does not work and actually fix or replace it?

Here are more details: After the iPad started displaying "No Service" for 3G most of the time I went to the local Apple store (a Lenox Mall in Atlanta) and they took it for an hour, said they ran diagnostics on it and that "it was fine." While in the store it did have 5 bars, but by the time I got to the parking lot it was on "No Service" again. I'm assuming that Apple and AT&T put 3G signal boosters in their stores to ensure people have no trouble with the signals when they are trying to decide if they are going to buy an iPhone or iPad.

I didn't have time to deal with it for a while but finally called tech support and they said I needed to replace the SIM card. So I travelled to AT&T and they replaced the SIM card, and while in the store it was fine. Before I had travelled 1/4 mile it was on "No Service" again. So here I'm assuming that AT&T also has 3G signal boosters in their stores too.

So time passed because I didn't have time to deal with it and finally was able to get a tech support support person to offer to return it for repair. Hurray! So I went to the UPS Store to ship it back, and then about 5 days later I get an email from Apple saying "We found nothing wrong, so we are shipping it back to you."* Sure enough when I got it back it was exactly as before: "No Service." where other iProducts have 4 or 5 bars.

Now you might ask, maybe it's really not the iPad but instead where I'm taking it? I'd consider that might be true had it not worked flawlessly for about 30 days. Or if I didn't live in Midtown Atlanta where signal strength is strong. Or if I didn't live across the street from the AT&T tower in Midtown Atlanta. Or if I hadn't seen many times where my iPhone 3G has 3 to 5 bars and my iPad had "No Service." Or if I hadn't seen my iPad with "No Service" and iPads of my friends with 5 bars. I've even started taking photos to prove it: 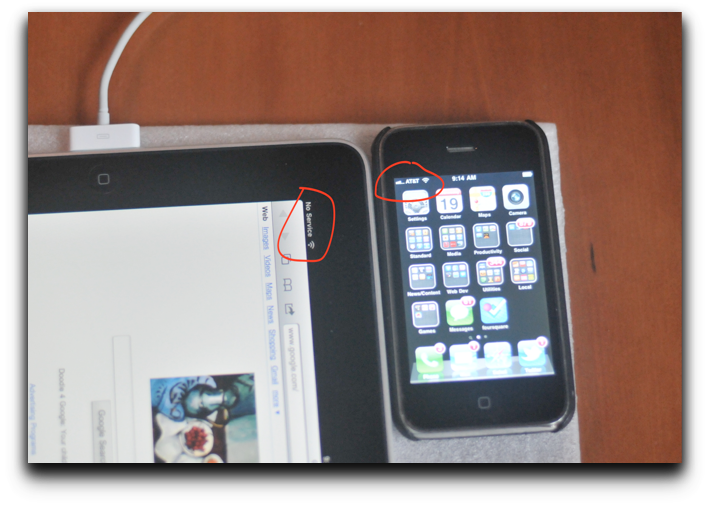 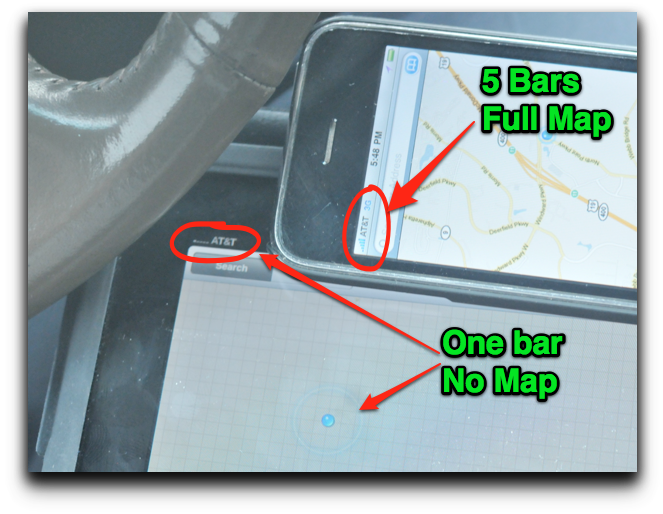 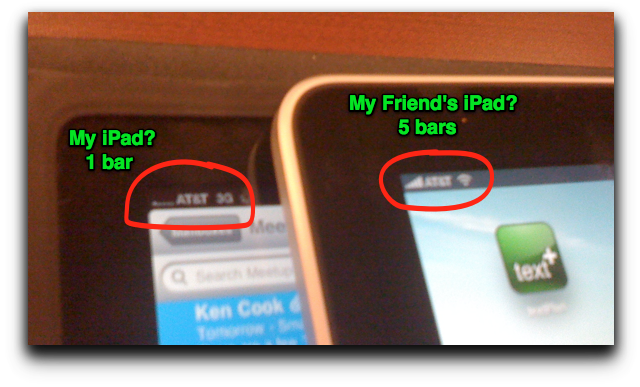 At this point my guess is the 3G antenna inside my iPad has failed and Apple's diagnostics don't detect it because they might not have been designed to detect that exact problem. So what I get is the continuous run-around rather than respectful customer service.

Thus far I've wasted about 20 hours on this problem, and at my $75/hour billing rate that's more than 2x what the iPad cost. I'm beyond sick about this. Does anyone know how I can get this resolved without another 20 hours of my time?

Gracious thanks in advance for your help.

P.S. I bought the iPad for web access when I'm out at places that don't have WiFi and especially for access to Google Maps. But since the 3G became so unreliable I don't even use it anymore. :-(

I don't have a resolution yet but I have hope, and a story. I had my assistant take my iPad to an Apple store again and they told her that it was because I didn't have a current AT&T account which was total BS. A working iPad still shows 3g signal without an AT&T account, but since I was in a meeting when she went to the Apple store I didn't get a chance to tell the Apple store person that they were an unhelpful idiot.

Then later in the day she stopped by an Apple Authorized Service Center when I was available via phone and the tech at that store told me the same thing (Ugh!). So I gave her my credit card, she signed up for a $15/month plan and then LO-AND-BEHOLD the service tech experienced EXACTLY THE SAME PROBLEM I HAVE BEEN DESCRIBING (as I expected): Hallelujah!!! He offered to send back to Apple with his explanation that it is INDEED a faulty iPad.

So, with fingers tightly crossed it seems like the answer to this huge fing time sink thanks to Apple's customer no-service might just be to **get 3rd party validation at an Apple Authorized Repair Center. I'll follow up to let others know if indeed this resolved my problem or not and if so I'll name and praise the service center for their help.

So, as a follow up, almost 9 months after buying the iPad and after 8 months of it's 3G not working, I finally got Apple to replace it. How? I had an Apple-authorized 3rd party service center look at it. They confirmed the problems and sent to Apple for repair. But it didn't end there! Apple sent it back to them and said it was fine. Grrr.

BUT, armed with the 8 months of no-iPad-3G love AND with the fact that the Apple-authorized 3rd party service center agreed I had a problem I berated the tech support guy until he agreed to send me a new one no matter what the results of their diagnostics said. And he made good to his word; a new iPad showed up on my doorstep several days later.

With that ends the saga of the failed 3G on iPad that Apple would not admit was a problem.

Now here's the sad, sad irony and how I still feel that Apple got the last laugh on me. The day I got my iPad back was the very same day Apple announced the iPad 2. With all the bad taste in my mouth from this Apple seriously has me looking at an Android tablet for my next upgrade. :-(

To help diagnose, jailbreak and use the Signal app.

While jailbreaking voids your warranty, you can unjailbreak and your warranty is restored. Perhaps the info collect (and/or screenshots) will help you debug, make a case, etc.

I'm not sure how to present the evidence to Apple without them giving you a hard time about the jailbreak, assuming they make the connection.

Copy your story and send photos to sjobs@apple.com

I just left the Apple store where they told me the problem was not the sim card and their diagnosis showed no issues with the software, so the problem was probably the antenna. They offered to sell me a new iPad since mine was out of warranty.

Not the answer you're looking for? Browse other questions tagged ipad wifi hardware applecare .

2
Does the "Find my iPad" service work without WiFi when you aren't paying for cellular service?
4
When should I try to get ACMT certified?
2
Change Apple ID on iPad without losing data
0
Reviving iPad Air from the dead
0
MacBook Pro Hardware & Software Issues under warranty
0
Safety of sharing my apple password on screen with apple technician
1
How do I convince Apple support that my iPad battery failed?