Is there any way to disable mouse acceleration on a mac?

Mouse acceleration is what causes the mouse to move slowly when moving it a tiny bit, and a farther distance when moved fast. In other words, I want the mouse to always move the same distance no matter the speed I use.

I'm using a trackpad, by the way.

To understand what I mean by mouse acceleration, try this:

As far as I know, there is no way to do this without external tools.

Usb Overdrive lets you do this http://www.usboverdrive.com/ and is what I use.

Mouse Curves http://triq.net/articles/mouse-acceleration-preference-pane-mac-os-x Has the advantage of being free, but Apple removing the acceleration API in 10.6 may have ramifications on its utility.

Go into System Preferences for Trackpad and turn the tracking speed all the way down to slow. What you can't do, I'm afraid, is have the mouse be unaccelerated and also reasonably fast.

it also can disable mouse acceleration with assign application

Edit: it's available for free at the bottom of this page. 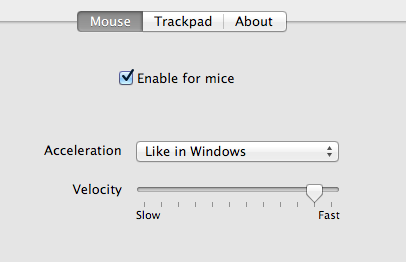 According to this forum post it should also reduce lag for pointer movement.

Fact: the on-screen pointer lags behind the mouse (or trackpad) in OS X more than in other operating systems, such as Windows or Ubuntu Linux.

I would like to complement this good topic, with a related mouse setting:

And it can be disabled: 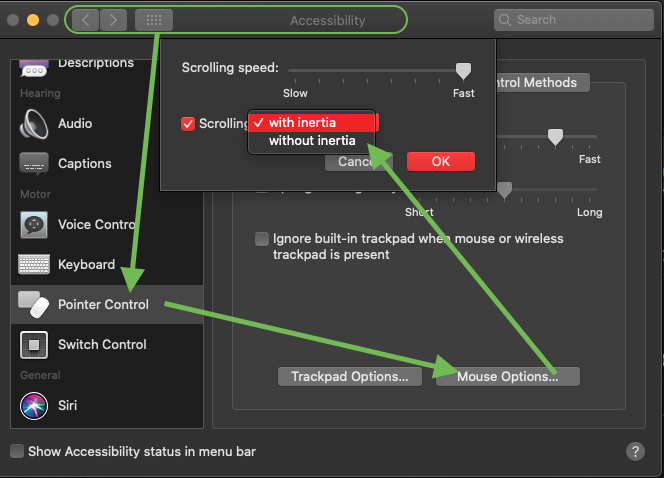 You might also look into a third party tool named MagicPrefs to twiddle with the tracking settings on Mac OS X.

Having faced the similar annoyance with my new Magic Mouse, I've come up with a script that doesn't require any third party solution. You can read about it in my blog post. I have this run as a handy menu option on Keyboard Maestro and keep it in Dropbox, but it's essentially just a shell script. So if you're interested here's the script:

I've set my Mouse sensitivity to around 1.8 which works for me. Increase/Decrease to a value you like.

Props to the gent/lady at ktwit.net who actually came up with the mouse acceleration kill script.

After trying several methods I ended up using the Smooth Cursor. It costs three bucks but it works and it enables you to control the mouse and trackpad acceleration separately.

Not the answer you're looking for? Browse other questions tagged macos mouse trackpad .

11
Is it possible to make a mouse accelerate like it did in Windows?

1
How can I allow the cursor to continue moving immediately after clicking the trackpad?
11
Is it possible to make a mouse accelerate like it did in Windows?
15
Macbook Pro with Lion: scrolling via trackpad vs. mouse
2
lagging cursor from magic mouse and magic trackpad
2
How can I make a Macbook Pro to recognise a connected mouse as a mouse?
2
How to disable mouse acceleration in OS X El Capitan while allowing mouse pointer speed to be adjusted
1
Wireless Mouse Lag
0
Trackpad and keyboard problems
1
How to make the Logitech 300s move wider?