How to customize .inputrc to make Command-Delete and Option-Delete delete lines and words in iTerm 2?

I'd like to add a little bit of consistency between editing text in the terminal and editing text in normal OS X programs. I use iTerm2, but I imagine any solution would involve using readline and .inputrc which probably would work in most terminals.

Specifically, I was thinking of adding:

As a side note, I am aware that there are Vi and Emacs style shortcuts for performing these operations. In fact I use Vi-style shortcuts quite a lot on the command-line. However, sometimes when my mind hasn't shifted modes, it’s disruptive. Thus, it would be nice if the terminal could support both OS X and Vim style shortcuts.

⌘← can be assigned to \eOH and ⌘→ to \eOF. You could assign ⌥← to \eb like in Terminal, but it doesn't work in vi mode or nano. 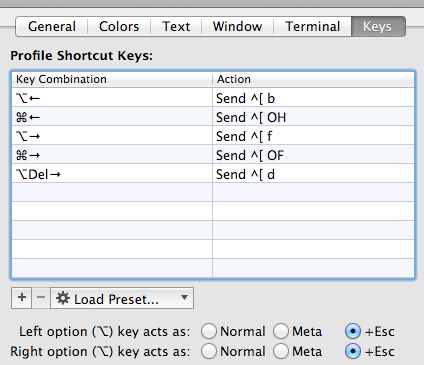 In emacs mode you could also add this to .inputrc:

The following post explains how to configure Alt+left/right in Iterm2. Interestingly, it requires both the configuration of .inputrc and customisation of iTerm2.

0
How to make command-key shortcuts work again?
25
Mimic Xcode's camelCase selection keyboard shortcuts in OS X
14
In iTerm, how can I change alt+delete to ignore slashes?
2
How do I move the cursor past the end of the line in Insert mode when using vi-style line editing on bash?
0
How to move cursor to the end of the line in a cell in Excel for Mac 2011
0
Common shell / editor shortcuts for Mac OS X
2
Holding down arrow key no longer quickly moves cursor to the right or left
16
Shift–Command–Left/Right Arrow started switching tabs in macOS Mojave Finder, clashes with text movement?
0
Big Sur keyboard shortcut to select text