I'm trying to get Xcode up to date... but i think i have a little problem.

I go in the Mac App Store. I find Xcode. I click on free button, it asks me to connect with my Apple-ID. Done.

I get the "install" button... I click and nothing happens. I have a loader spinning during few seconds at the right of buttons Prev/Next in the top bar... but nothing else.

Where is a process bar ? Mac App says to me that Xcode takes 1.50 GB but is downloading ? How can I follow the download ? Is really downloading ? Do I have to uninstall the Xcode 4.1 ?

I am a bit lost with the changes to this program and the new App Store.

Setting aside whether you are actually done with the prior version of Xcode (as older versions have some capabilities and older SDK that the newer versions no longer support - you might want to keep an old machine with an old Xcode around if you are supporting legacy software products - but let's assume you don't care about anything other than making new programs with the newest Xcode) let's dive in with the steps.

To prepare for the new Xcode, it is easiest to uninstall all previous versions of Xcode by following the uninstall documentation for each version you have installed.

For Xcode 4.1 you will want to run the perl script to clean things up:

To uninstall Xcode developer tools on the boot volume along with the directory, from a Terminal window type:

For the new Xcode, the App Store doesn't normally show the download progress so you must track it from Launchpad or just by watching the /Applications folder in Finder. It shows INSTALLING as depicted above, but the Launchpad view has a live progress bar and summary of the 1.61 GB download as depicted below. 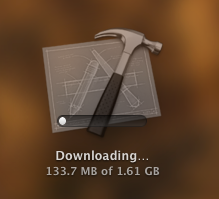 I just want to share my experience. I started the 4.5.2 Xcode install from the the Mac App Store and the message Installing was displayed for about 25 minutes while it installed 4.5.2.

However, I did not have an Xcode icon in LaunchPad to track the progress. Also, Xcode in Finder had the old file date until the upgrade was finished.

So I had no clue aside from hearing my hard drive spin a few times, that there was progress until the Mac App Store message was changed to Installed when the upgrade was completed.

The good news though is that my patience paid off and Xcode 4.5.2 was successfully installed.

Not the answer you're looking for? Browse other questions tagged upgrade mac-appstore xcode macos .

2
How can I (re)create development and build tools on a corrupt installation?

3
Xcode 4.1 installation not customizable? Missing Installation Type Step?
5
How to upgrade Xcode 4 to 4.1?
1
Xcode 4.1 stuck trying to load debug symbols from iPhone 3G
0
Xcode 4.1 not downloading - Lion
3
Apple App Store continues to show Xcode 4.1 “Installed” even though I have uninstalled it.
6
How do I get Xcode 4.1 running under Snow Leopard?
4
Cannot install Xcode 7
5
Installing Xcode on OS X Yosemite
0
Xcode 7.2 downloading but not installing
3
How can I completely uninstall Xcode in macOS Mojave 10.14?