How to get rid of nuisance time machine popup dialog

Every hour the Time machine pops up a dialog window. It takes the focus off of what I am doing and is generally a nuisance. The external disk drive is connected via a thunderbolt cable. It is an apple thunderbolt powered 1t drive. It is primarily used by time machine. I could care less that it cleans up its own space, just do it and don't tell me about it. There is nothing I can do or should do.

Text of dialog below:

Time Machine couldn’t complete the backup to “HD-PATU3”. The backup disk ran out of space unexpectedly. Time Machine will try to make more space available by removing expired backups during the next scheduled backup.

Is there anyway to get rid of this nuisance? One time I went in and manually cleared a bunch of old time machine files, and that fixed it until it filled up again. But I thought apple was better than that. Forcing users to understand the administration of there machines and do manual efforts.

It could be as simple as de-selecting the 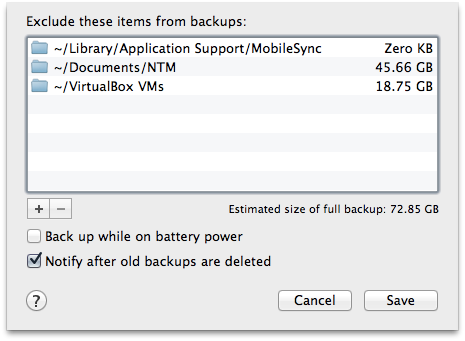 But there also is a warning that happens when the size estimate for pre-backup pruning is much larger than the free space on the system.

We would need you to edit your question to show a bit more detail about the version of OS X you are running (there are 3 with Time Machine) and what the system believes the pre-backup estimate size is as well as the size and space on the backup drive.

I have seen a few cases where you can't get around this message without starting again on a new drive or manually clearing enough backups to make room for the normal silent operation to run. You can see most of the information needed from the console app and searching for backupd in /var/log/system.log (or any collection of logs that includes the system log)

Not the answer you're looking for? Browse other questions tagged time-machine .