Using the automator is possible to execute a shell script that requires input from the user (a password) ? The shell script should be executed in the currently selected folder. I wrote a "Run Shell Script" action like in the following figure: 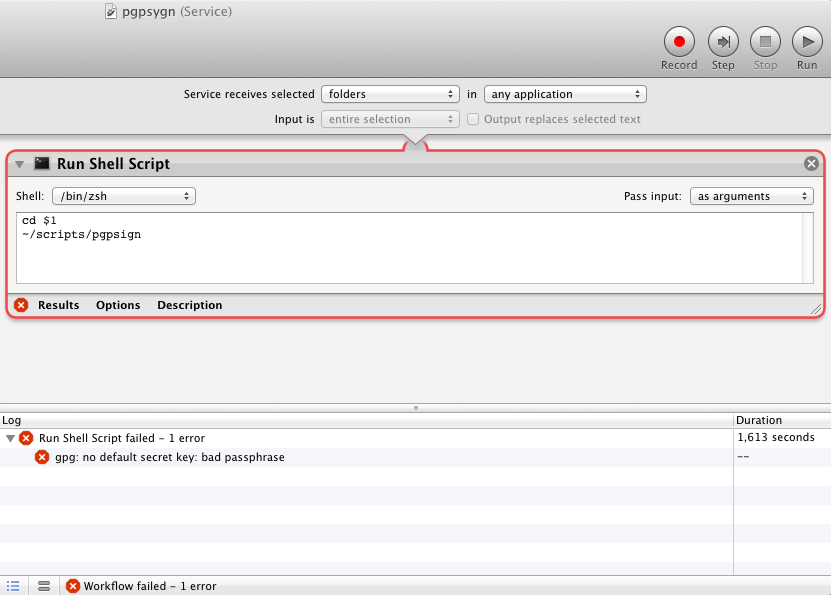 About the shell actions:

First I change to the current selected folder and then I execute my script, that as far as I understand is failing since it requires processing an input before proceeding.

Below the complete code of the script (in Scala)

I'm not really familiar with the Scala language at all, but it looks like the script is only built to take user input for the password, not arguments or stdin, which is what's required for Automator to pass it data.

The shell that Automator runs scripts in is non-interactive, so your script can't directly prompt the user for a password. If you can rework your script to take a password via stdin, you could use an AppleScript wrapper to get a password dialog, if that's what you're hoping for.

If you rework your pgpsign script to take a password from stdin, you can use an Applescript action (with some shell scripting embedded) to display a password dialog and get the results you desire.

Replace your Run Shell Script action in your current workflow with a Run AppleScript action, with the following code:

It's not the most straightforward, so I'll run through line by line what it's doing.

This gets the input from the service (the folder you selected) and turns it into a string that the shell script can make use of.

This pops up a password dialog and stores the result to the pass variable. Ordinarily in AppleScript you don't need the System Events tell portion, but because of some quirks with Automator, it's required here.

This ties it all together and sends the required parameters to your script. First we change to the selected directory (to answer your question in the comments, as your script is written, it is necessary to first cd to the directory you want). Then echo is used to send the password to stdin, and it's piped through the perl portion to strip the trailing newline (which is an annoying characteristic of AppleScript and would otherwise cause a valid password to fail), then piped to your script.

Sorry for giving you a lot to digest, but if you want to use Automator for this, it's probably the easiest way, unless you want to hardcode your password (which is obviously inadvisable for security reasons).

Not the answer you're looking for? Browse other questions tagged automator script .

2
Running a gpg shell script to decrypt a file via Automator
4
Automator: How to replace a particular string with the filename?
2
Automator to execute shell script with an input text file, copy it to specific directory
2
Automator won't execute my bash shell script
1
Automator: Change to selected directory and run shell script
5
How to create an Automator service to run a script on all files in a folder
6
How to pass path of selected file from Finder to Automator Shell script
3
Split csv file using Automator Service (Finder Context Menu)
3
Automator - Shell Script - ffmpeg: image sequence to video
0
Automator: Decode Decode64 selection and display output in a new TextEdit window