How to reduce photos in iPhoto while keeping metadata?

I got carried away taking high-res and RAW photos, and now my iPhoto Library is just too big. Most of these photos aren't good enough to take up that much space, but they're still good enough to keep. How can I reduce the sizes of my photos while maintaining iPhoto metadata (e.g., albums, rating, location) for them?

Long Answer: iPhoto cannot create a smart album based upon File Size, so you'll have to either group them by other means or manually create an Album with the offending photos (the big ones). Automator, on the other hand, is perfectly capable of finding iPhoto images by size (and by Rating stars).

Each of those have consequences: if you don't save a copy of the original photo, and the resulting quality is not something you like, there's no turn back (unless you have a TimeMachine or similar backup of course).

In any case, Launch Automator, create a new "Workflow" and add the following actions: 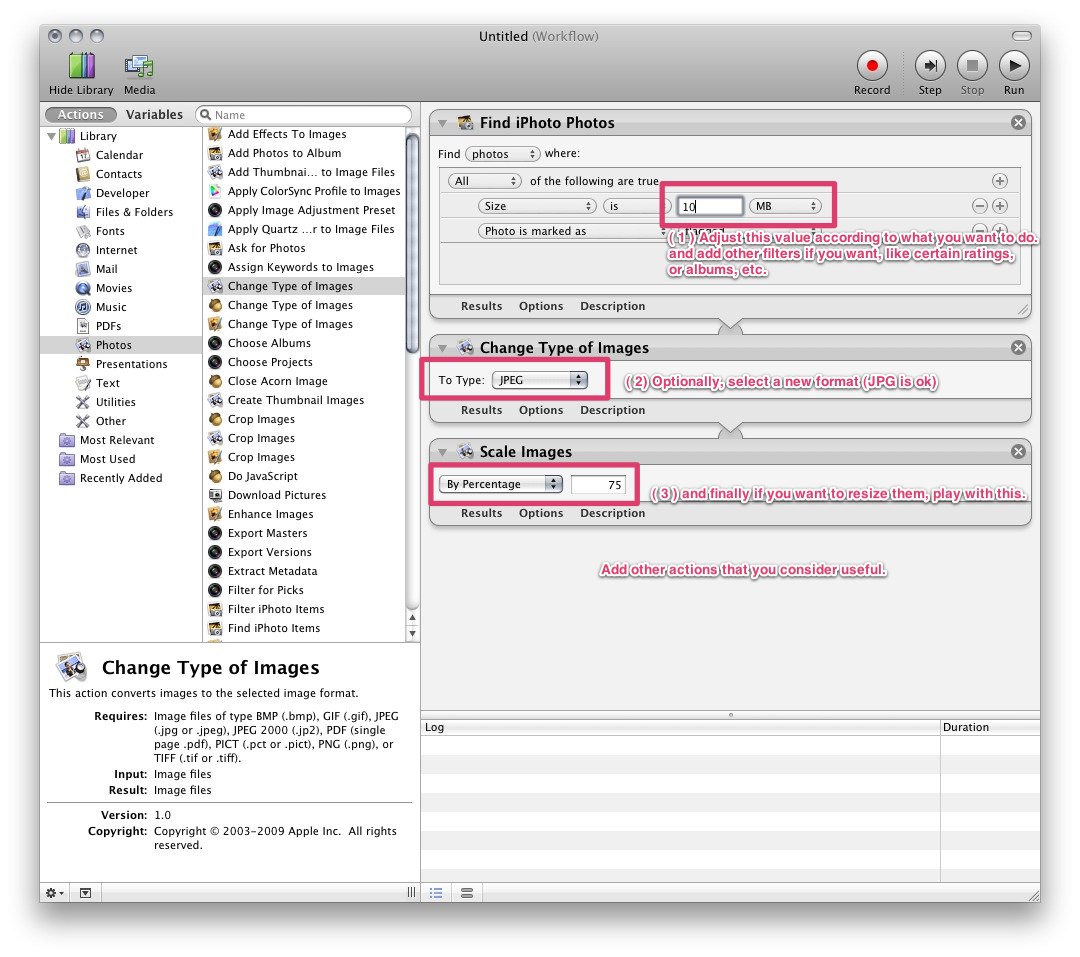 NOTE: I've removed the "Make copy" actions that Automator asks you to place by default when an operation will "affect" files, but leave those to "experiment" so you don't alter your original images, at least until you're satisfied with the results.

I suggest you try with a small set of images before going Coo-Coo with the whole Library. As in create a small album with some of the "big" images and try from there. You don't want to wreck your iPhoto library…

This should preserve all the metadata and original photo, while making a Batch adjustment.

If you have programs like Pixelmator or Acorn, you will have more automator stuff there. The more the merrier.

Not the answer you're looking for? Browse other questions tagged iphoto automator display .

2
Access iPhoto photos?
6
How to delete duplicate photos from an iPhoto event?
2
Editing iPhoto-specific metadata
2
Make iPhoto overwrite my photos
4
Can you copy location metadata from one photo to another in iPhoto?
0
Folder actions has stopped importing photos into iPhoto
3
how reduce the size of all photos in my iPhoto library?
2
How to increase speed between changing photos in Photos/iPhoto?