How to batch rename images, in reverse numerical order?

I have about a thousand images and would like to rename them without having to do it manually if possible.

You can use an Automator Workflow. 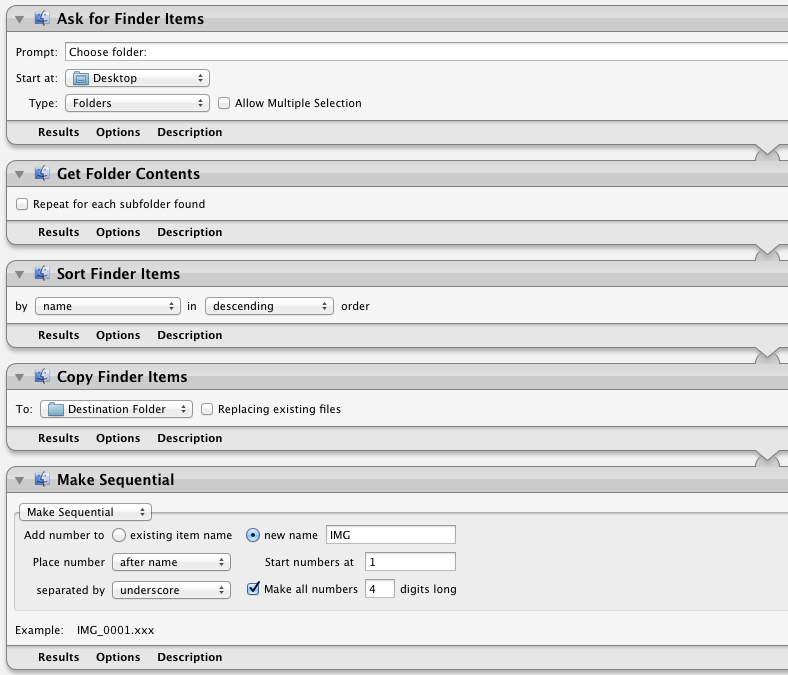 Copy Finder Items step is optional, just to be sure not to mess with original files.

Here's another shell script. You can save it as a normal text file and then run bash /path/to/script.sh from Terminal. Remove the echo to actually rename the files.

Try this in the Terminal:

The renamed files will be in the new folder.

Here is a brief explanation of how this works: it creates a script named 3 that does the renaming. For that, it creates a listing of the images in alphabetical order in 1 and in reverse order in 2. Then one line is read from each file and combine into a mv command, which is executed when you run 3. The images are renamed into the new folder to avoid collisions.

Name Mangler ($10 and has a free trial) or Name Changer (free/donationware) is also very good for this sort of thing if you're after a nice, simple app.

You can use the perl rename.pl script looming around the web (for example, from here), and put it into the folder with your image files.

Its usage is simple and documented and it is pretty powerful. To use it for your case, replace MAXIMUM_NUMBER by the number in the last photo, then run:

Note that the rename.pl script can do much more than that if you ever need more complex renaming.

Not the answer you're looking for? Browse other questions tagged finder automator filesystem image-editing rename .

1
Can I safely rename all directories in my home directory to lower case?
2
How can I rename an ordered list of files with an ordered list of file names?
2
How to automate renaming a file based on its parent folder?
8
Renaming files/names in bulk, any smarter solution?
0
Renaming files with special structure in a quick way
2
Automatically update multiple file names?
4
Automator action not supplied with the required data
1
Add exif creation time with correct timezone (TZD) to filename