How to remove the automatic ratings from songs in iTunes?

I want to remove the automatic ratings from my songs: 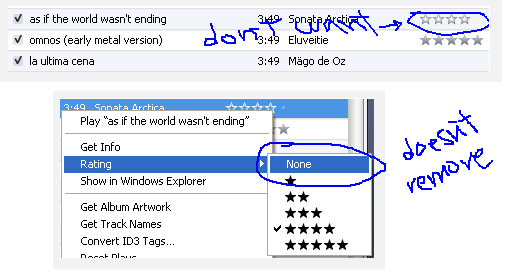 However, they don't disappear after right-click->Rating->None

Click on the left of the stars from the album the song belongs:

they are now gone:

Apparently, this is the only way to change the album rating (the right-click menu doesn't show any options to change the rating).

I have a smart playlist that displays songs with "No Rating" in order to listen to, rate them, and put them in the applicable playlists I have. My problem was that the Auto Rating for an album would give all other songs on the album (that the song I just rated was part of) a grayed out rating. Then when the Smart Playlist updated it would delete the grayed out songs from my playlist and I would have unrated songs floating around.

To combat this I enabled half-star ratings for my iTunes. http://www.instructables.com/id/How-To-Enable-Half-Stars-In-Itunes/

I was using 1 star to denote a song to be deleted. (Wayyyy to much music in my itunes) But I changed that system to use a 1/2 star rating to denote deletion.

This is because the best way to keep songs from being removed from my "Unrated" smart playlist was to do this.

Go to music, playlist view. Sort songs by rating. Go to the first song that has no rating. Click it (It should be highlighted blue) Now, scroll alllll the way down to the last song. HOLD SHIFT and click that last song. Now all of the No Rating songs are highlighted. Right click, Rating, 1 star.

I then updated the smart playlist to show songs with a 1 star rating. Now, rating one song in an album will not change the ratings of the others in the same album and my Smart Playlist functions as intended.

I'm currently 22% of my way through rating and sorting my 14220 songs. This 'fix' will save me a lot of time of having to go write down all the albums that iTunes automatically rated, then go to album view and one by one unrate the albums.

If you would like a somewhat easier way to unrate albums. Right click on the bar where "artists" "songs" "time" "rating" is and add the "Album Rating" to the bar. Now sort using that button and just look for the darkened star ratings. click 1 song in that album to highlight it. Then click and hold in the Album Rating for that song and drag to the left to give it "No Rating".

TL:DR I finally found a way to keep iTunes from pissing me off and wasting hours of my time.

I FIGURED IT OUT!

Not the answer you're looking for? Browse other questions tagged itunes ratings .

13
Unwanted hollow star / album ratings foul up a Smart Playlist of zero-star songs
9
How do I transfer music ratings from one computer to another
0
Display and change ratings in iTunes Mini Player
4
iTunes half-star ratings gone from iOS7
23
Have hearts replaced star ratings in iOS 8.4 with Apple Music/iTunes Match?
8
How do I prevent false iTunes ratings?
5
How to unrate multiple album ratings at the same time?
2
How to star-rate "Apple Music" files in iTunes on OS X
2
Are album ratings gone in iTunes?