Sent items listed by sender's name (my name!) not recipient in Outlook for Mac 2011

In Outlook 2011, in the network "Sent Items" folder, all emails are listed showing the sender's name (my name), not the recipients' names.

That means every single email is headed with my own name, like this:

...and so on. There's no clue at all as to who these emails were to, until I open each and every one.

I guess it's reassuring to be told that every email that I sent was sent by me and if I was ever to forget my own name while browsing my sent emails folder, it'd be super useful, but it's not very helpful for navigating sent emails.

Is this normal for Office for Mac 2011? How can I fix this, so that the list shows the recipients' names instead of endlessly reminding me of my own name?

Things I've found while researching this:

A simple guide on how to fix this would be the best answer, but I'd also welcome any knowledgable thoughts from people with experience of Macs on Microsoft Exchange Server networks on whether this sounds like an Outlook settings issue which I can fix on my machine, or some issue relating to how the Mac gets data from the server and network. The fact that Apple Mail users have encountered the same issue with no apparent fix makes me think the problem might be in the interaction with the network rather than the mail client - but that's way beyond my limited knowledge of these things.

I don't know whether the local ("On my computer") Sent Items folder has the same problem, as it's configured so that no emails except drafts are ever stored in these local folders. Drafts saved locally are listed by recipient as expected.

Changing the "Arrange By" value from "Date received" to "Date Sent" on the top of the mail list solved this issue for me.

Note that if you are using Outlook 2011 for Mac with Exchange then you may have to right-click/control-click on 'Sent Items->Folder Properties' and then click 'Empty" to empty your cache before this technique of switching from 'Date Received' to 'Date Sent' will actually work. You need to have your 'view->Navigation Pane" selected to see the 'Sent Items' folder you have to click on. Once I emptied my cache, this worked like a charm. Thanks!

Click on the sent icon between inbox and drafts.

You may need to do this each time you access the sent lists. It works for me. Not satisfactory, but achieves the desired result.

I am not a Mac power user but I did have to try and solve this same problem. I have 4 different email accounts I am managing through Outlook 2011 for Mac. In 3 of the four my sent email list displays who the email was sent to. I could not figure out how to get the fourth to also display this way. I solved my problem using the other hints here, however, they were not a perfect solution for me. I don't know why.

Here is how I was able to address it. It's not perfect but it's working for me:

I simply right click on Arranged by then click on custom, then open fields and move To to the list on the right panel if it is not there and then move to the top.

The recipient name will appear first in the "Sent Items" list, and it will be still arranged by date received.

If you have outlook 2010 like me then this is the fix:

Right click on the Arrange By: button.. A box will appear and at the bottom of it theres a button, View Settings.. Click on this and then on the Columns button.. In the box on the right where it says Add-> arrange the list and ensure the top 3 items are To, Subject and Sent. They can be arranged by clicking on say To and using the move up and move down button to arrange them. Arrange them until they're in the order above then click OK and OK again.

That shoould fix it now.

For Outlook 2011 for Mac had to move the reading pane to the bottom, drag the columns to the desired order ("To" column moved to the far left, sorted by date sent), then right click on the empty box to the left of the column header to save this as the default arrangement. Then I could switch back to reading pane on the right and still see the recipient sorted by date.

I was able to solve the issue by changing the "Arrange By" choice to "Conversations".

I fixed this by changing the reading pane view from right, to below and then switching back.

Change the viewing pane to "bottom," so that you can see all of the different boxes at the top of the email pane.(subject, to, from, etc...) Drag the "To" box left of the "from" box. Change your view back to whatever you had it as before and your set!

with outlook not running from run menu enter: outlook.exe /cleanviews

Note that the space if intentional.

After hours on the phone with MS, this took all of 1 minute to fix the problem

Scroll over View → Current View and click Sent To. 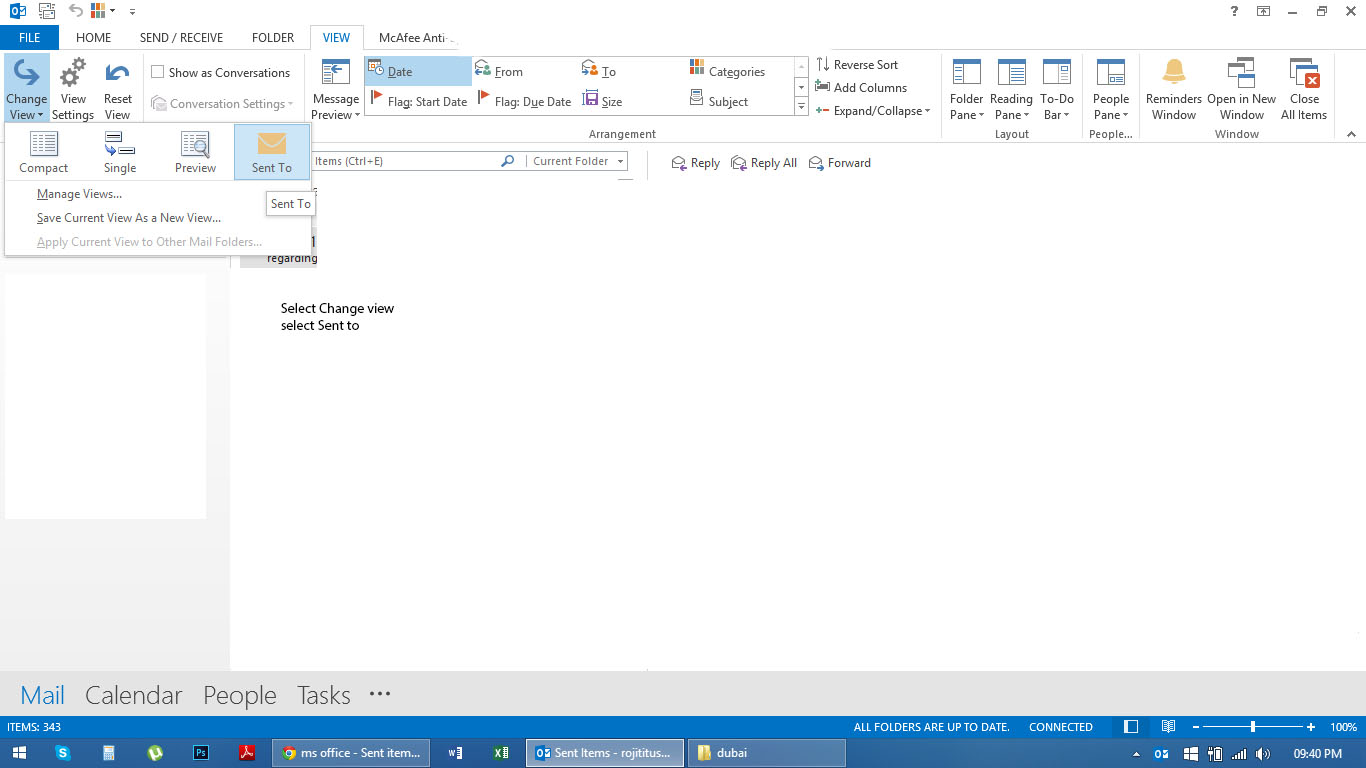 You get recipient address in your sent items in outlook 2007.

Not the answer you're looking for? Browse other questions tagged mac ms-office exchange-activesync .