Can anyone recommend a programmers' editor?

I am aware of Coda but am looking for other options before I drop 100 bucks.

Espresso is nice. Similar to Coda.

Doesn't address all of your needs but I think it's pretty snaz.

BBEdit by Bare Bones fulfills all of your requirements. Pricey but 100% worth it.

An editor that gets overlooked a lot is MacVim. It's based on the venerable vim editor, from *nix, and can do everything you asked via plugins.

I show it supports 176-ish different languages, including all the ones you mentioned.

I regularly do lookups of existing methods, variables, random text phrases via a CNTRL_N or CNTRL_P mapping which searches all the open files and pops up a list of the hits.

Vim calls its projects "sessions", which stores all the files, window settings, macros, etc., for later reloading. From vim's "direct" mode, :mksession path/to/sessionfile will create it. Sourcing it later from the command-line is simple: vim -S path/to/sessionfile.

Upload to server functionality is handled by the netrw plugin.

vim does have a steep learning curve, the vimtutor, which comes with the app, can help jump-start you. Also, there are active users here and on SO's sister sites, plus on the vim IRC node on freenode.net.

Probably the most awesome thing about vim, is its available in an interfaced version on Mac OS as MacVim, on Linux using gvim, on Windows, and from the command-line of any of those OSes. vim on any of them will use the same commands, same plugins, same themes, etc., within the limitations of those environments. I bounce back and forth from Mac to Linux all day long and have at least one vim window open somewhere.

And, lest anyone think I'm not familiar with the Mac-only alternatives, I own all my copies of Coda, BBEdit and TextMate, and use them. I go way back with BBEdit, and actually used to occasionally demo it at MacWorld. It's great, but I use vim with the same settings everywhere, and none of the other editors can do that. So, if you need that cross-platform compatibility, look into it.

Share
Improve this answer
answered Jan 17, 2011 at 23:23
community wiki
mmmmmm
Add a comment  |
8
Want to improve this post? Provide detailed answers to this question, including citations and an explanation of why your answer is correct. Answers without enough detail may be edited or deleted.

Smultron is one of my favorites, along with TextWrangelr. Both are free.

ActiveState's Komodo is an excellent cross-platform IDE (it's based on Gecko, so feels as native to OS X as Firefox does).

It includes all of the features you mention. There's also a free, open-source, version, Komodo Edit that includes nearly all the features (e.g., no source code repository integration).

NetBeans is my development environment of choice. While it's not my text editor for regular files - I'm using TextWrangler or vim on the shell for that - it is the most usable IDE I've come across so far.

Ultraedit is now available for MacOS X. I haven't tried it yet. But if it comes with the same features as the Windows version (which I use on a daily basis as part of my job) it is absolutely a good recommendation.

It can do all the stuff you are asking for with the exception of providing an integration with software configuration management. Man, would I love to see this implemented.

jEdit do some of your requests, but not all of them, and it's also free.

You can read here its feature and languages that it supports. 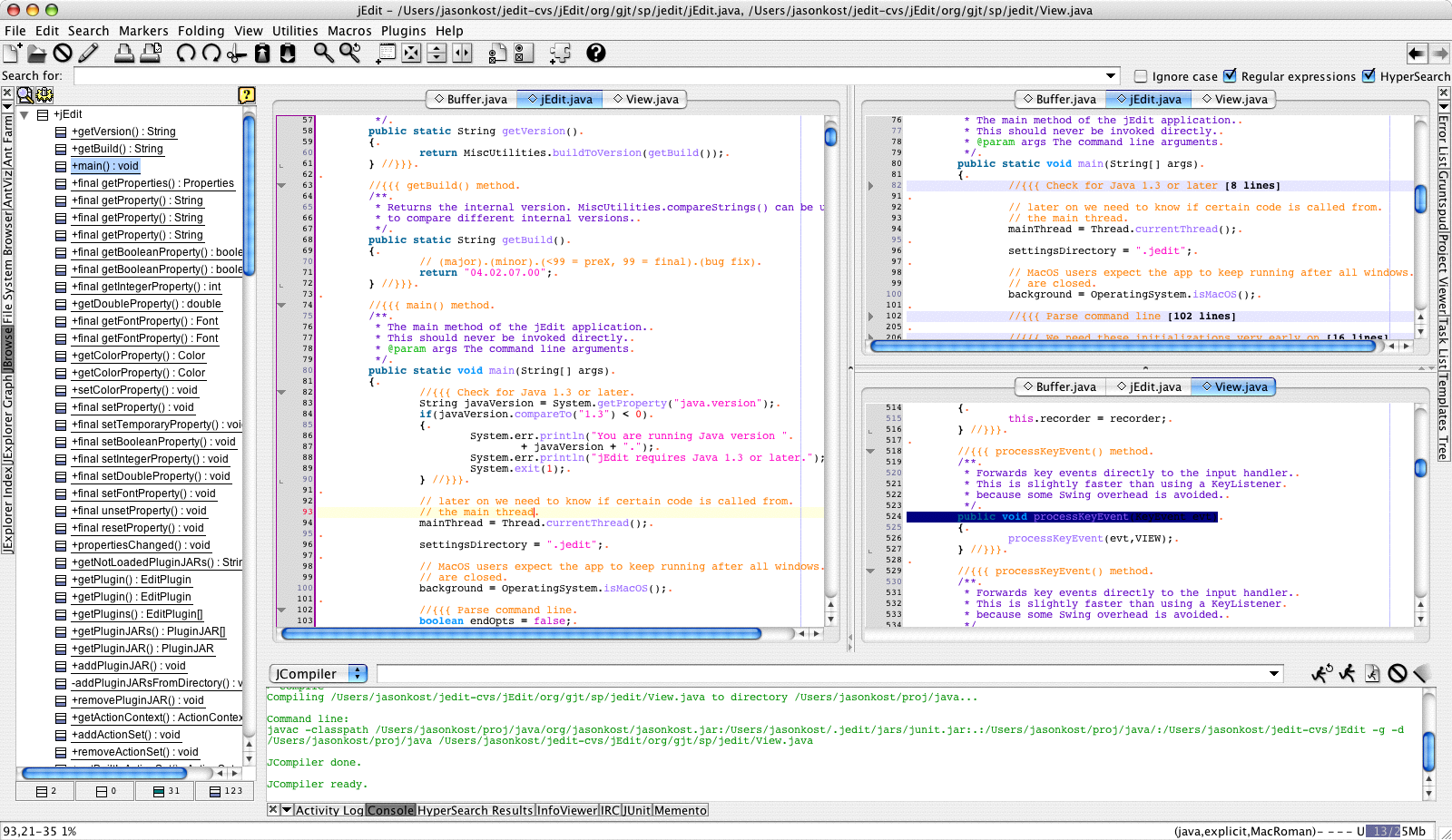 i'd go with Fraise, which used to be Smultron. works with very many languages and has a minimalist interface. syntax highlighting.

I'd second the recommendations for Sublime Text and the JetBrains products (I use WebStorm extensively in my job). If you want something free, atom is well worth a look. It's fairly bare-bones, but has a wide selection of plugins that should encompass what you need.

It has been mentioned, but only in passing:

Atom (https://atom.io/) is open source and developed by GitHub. Integration with github is superb and it is particularly interesting these days since there is a lot of development with new features and new ideas regularly. I think it will cover your whole list of requirements through extensions (packages - https://atom.io/packages).

Beyond up-voting @philip's BBedit recommendation, I am compelled to emphatically endorse BBEIT: BBEdit Simply the best coding editor I've used PC or Mac. I've not used VIM but I've been coding since before DOS existed, so I understand the speed of all-keyboard-all-the-time editing. I'll give you that and yet stand by my BBEdit endorsement.

For me Jetbrains PHP-Storm is simply the best & most complete IDE!

It has a lot of good and usefull features though it stays simple to handle and setup.

It's available for Linux, OSX and Windows. .

A 24 inch late 2009 iMAC with a 2.66 Ghz Core Duo, 4 GB RAM and Mavericks installed is definitively too slow to get the work done in time!

I'd recommend as a minimum 8GB RAM on a OSX Mavericks and 16GB on a windows machine. Linux should stand with whatever you have ;-)

Share
Improve this answer
edited Jun 19, 2015 at 7:08
community wiki
9 revs
pc-shooter
Add a comment  |
-1
Want to improve this post? Provide detailed answers to this question, including citations and an explanation of why your answer is correct. Answers without enough detail may be edited or deleted.

These are some of my favorites from a front end designer's standpoint:

Not the answer you're looking for? Browse other questions tagged software-recommendation development text-editor .

3
How to get the line number in TextEdit
-1
Notepad2 alternative for Mac
1
What's your favorite multi - editor on OS X?
0
An alternative to the text editor TextMate for PHP development?

10
How should I set up my coding environment for PHP, mySQL, and JavaScript development?
125
Can anyone recommend an app for creating flowcharts and diagrams?
5
What is the most advanced JavaScript editor for OS X?
0
An alternative to the text editor TextMate for PHP development?
2
Looking for a text editor with specific syntax highlighting features
3
Can anyone recommend a stop watch or timer which stays always on top?
0
Slideshow IDE for programmers?
0
Anyone know of a single-pane Markdown editor for MacOS
1
Looking for Text Editor with File Browser for logs