My girlfriend's Macbook crashed while attempting to restore from a hibernated file. The progress bar stopped at ~10%, after which we restarted the computer for a normal startup.

This hibernated memory image had an unsaved document open in Pages, which we'd like to recover. There is a sleepimage in /private/var/vm, which I assume is the hibernate image which never got correctly restored. We backed up this thing to keep it alive.

Edit: After reading this answer on Binary grep I tried to perl -ln0777e 'print unpack("H*",$1), "\n", pos() while /(null_padded_substring)/g' sleepimage, again being fruitless. I padded it with nulls in order to attempt a match for UTF-8 text. Then I tried with .* globs between each character –- still no dice.

So Pages probably doesn't store text by any common encoding in memory. I would need to find a translation rule between ASCII string and Pages data representation -- I'm thinking maybe some kind of Objective C string buffer. To me it seems very weird to store character data as anything else than a sequence of characters, but this seems to be what Pages is doing.

If you have any idea on how to figure out the in-memory representation of text inside Pages, it might be very helpful in solving this problem. Maybe I can dump and read the process memory in some simple way?

Another possible solution is simpler -- I'm assuming it is somehow possible to reboot the computer from this sleepimage, but I can't find any documentation as to how you would proceed with that. Some other users (macrumors) seem to have encountered this, but for all the forum questions I've found, none of them have responses.

Complex suggestions involving programming are welcome. I do C and Python.

While visiting the new painting and sculpture galleries at MoMa, be sure to traverse the staircase bridging the forth and fifth floors in order to see Henri Matisse’s monumental image of joy and energy, Dance (1909). The painting was originally intended to hang in the stair hall of a Russian palace in Moscow.

And the recovered text: 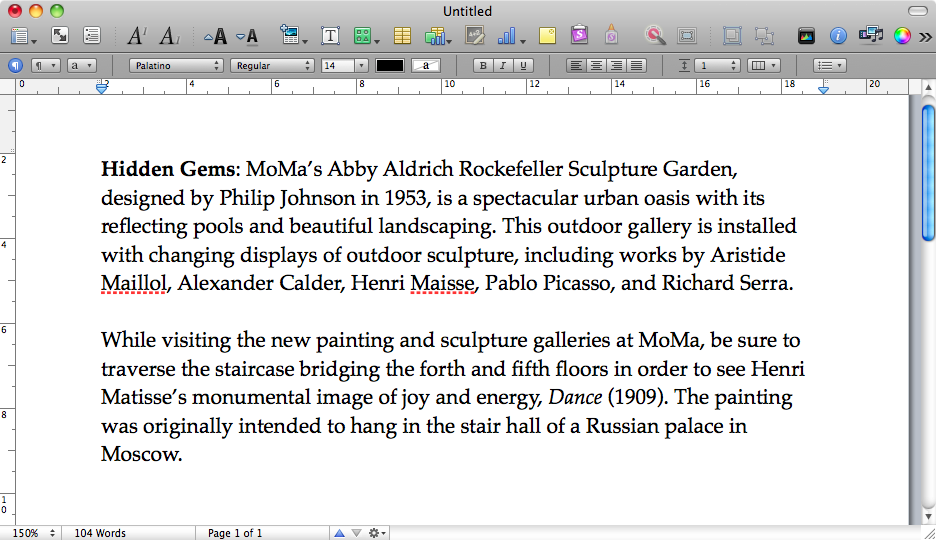 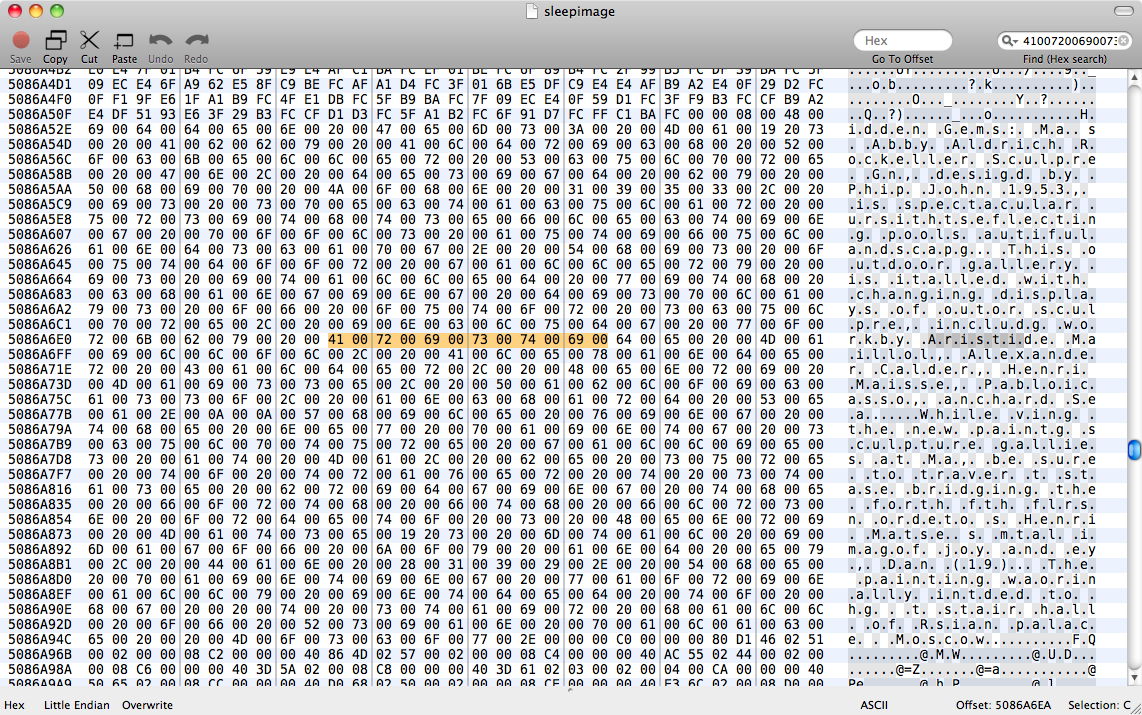 It seems that for an (unsaved) Pages document (almost) all characters in your text are separated by 0x00 in memory - thus STRING becomes S.T.R.I.N.G with . being 0x00. So you either have to search for that; I can recommend 0xED for a graphical front-end... ..or you search for loobsdpkdbik which seems to be (part of) an identifier, which comes 5 bytes before the text (at least only in one case).

First try, IF known_string WAS stored in plain text (not the case)

I guess you could try using

If that works, you would know the offset in bytes to get to that region, but I would not know exactly how to proceed there. Depending on the filetype, you could probably check for the filetype signature near that informed offset and try to isolate only the bytes that do make part of that file. For this, I guess you could either write a C program to do that, or maybe execute hexdump -s known_offset sleepimage and try getting only the bytes that relate to the file you need.

For instance, suppose I wanted to know something about Chrome:

What is your filetype? Do you think that some procedure like this could be used in your case? Note that I have never done this before, and I am basing myself on a lot of "guesses", but I suppose something like this has a little chance of working..

Second try, a slow method for parsing all bytes

The method before does not work because it also searches only for plain text, my bet. For this second text I created a simple C program containing:

So I could search for "assim", which would be your known_string, in that text. In order to know what bytes to search for I did:

Which returned to me: 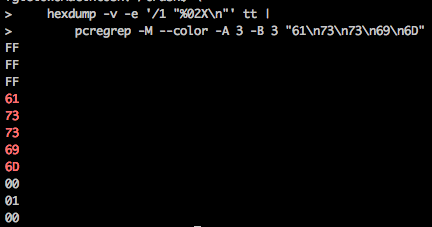 If you did something like that, I guess you could get your data.. It would be kind of slow to parse 2~8GBs of bytes though...

Note that in this approach you must find the hexes in capital letter (write 6D instead of 6d on the last grep), not in under-case letters, and use \n instead of white-spaces (so you can use -A and -B for the grep). You could use grep -i so it became case-insensitive, but it would be a little slower. Hence, just use capitals if this is used.

Or, if you want a do-all automated "script":

Not the answer you're looking for? Browse other questions tagged snow-leopard memory pages hibernate .