Is it possible to delete the "useless" apps pre-installed on my Mac?

There are some preinstalled apps that came with my laptop that I know I wil never ever use.

Apps like "Notes", "Stickies", "Game Center", etc.. that were preinstalled in my Macbook Pro are apps that I don't plan on ever using and it's taking up too much space in my Application Folder.

Are there any ways to remove them? Please note that I have already tried dragging it to the Trash bin, but it won't even go to the Trash bin. It' just stuck in my computer forever.

Current versions of both suggested apps (AppCleaner, CleanMyMac X) no longer offer deletion of the apps preinstalled with MacOS (as tested on MacOS Catalina/10.15 in 2020). The answer below was originally written in 2012.

At one time or another I have deleted a whole bunch of the standard issue programs that I knew I wouldn't use. I prefer not to have them wasting my space, however little it may be. Also, I use a Mac Mini as a media centre, changing the standard hdd for an ssd, so space is at a premium.

Appcleaner is one app that I have used for several years to tidy stuff up. Never had a single issue with deleting Stickies, Notes, Bootcamp Assistant, Audio Midi Setup, RAID, Podcast, etc, etc. Appcleaner preferences should be set up to delete "protected" apps and then will delete the app and all the other files (plists, etc.) that go with it.

Another app, CleanMyMac, does the same, but will also do a more general clearout of caches, etc. Both recommended...

You express your concern for removing the programs as connected to the fact that they "take up space" in the /Applications folder. This could mean either they consume disk space, or they take up visual space when you list the directory.

As far as disk space is concerned, on most installations of Mac OS X, space in /Applications is the same as space in any other directory: space on the primary system drive. While these applications do indeed take up a non-zero amount of space, relative to the size of the operating system, the space saved by removing them is fairly trivial, while the risk of side effects is slightly less trivial

If visual space is the concern, however, you can make these programs disappear while leaving them in place in case the system needs them. At a terminal prompt, you will need to type

(for Stickies, for instance; substitute the name of any other program you wish to hide).

The sudo part of the command runs the command with administrative privileges (necessary to modify system files). chflags hidden tells the system to mark these files as "hidden files" that will still be present on disk, but not appear in Finder windows. Finally, /Applications/Sitckies.app is the path to the application you want to hide.

The original question was posted before the days of System Integrity Protection (SIP), so this address SIP enabled versions of macOS thru the current macOS Mojave...

Not that I recommend deleting pre-installed Apple applications; however, if that's what you're wanting to do, then make sure you have a current Time Machine backup. Then reboot1 your Mac to its Recovery HD and then in Terminal from macOS Recovery you can simply use the following example command:

There is no real need to disable SIP or reboot back to normal mode to make the changes, etc.

The following clipped screenshot of Terminal running from macOS Recovery shows though a series of commands the above command can work as is and the information presented is accurate. 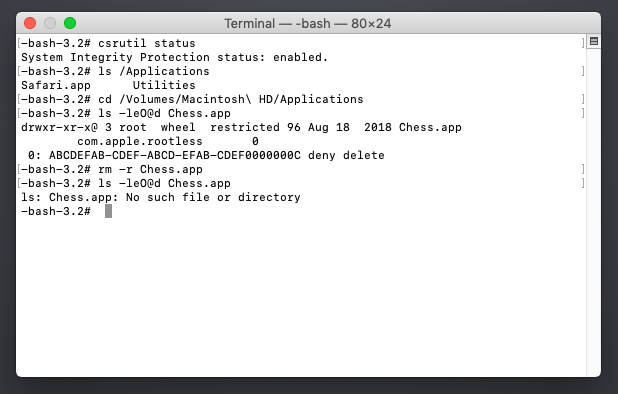 Note that from macOS Recovery those permissions and ACLs are ignored and why a protected App can be directly deleted without disabling SIP and doing the reboot-dance as has been suggested in the past.

In general, you can remove applications simply by dragging them to the Trash (and emptying the Trash). In this case, you can't remove them because they are part of the core OS. Hence error message in Finder (Mountain Lion):

"Stickies" can't be modified or deleted because it's required by Mac OS X.

You can almost certainly remove the core application from the command line, but I wouldn't recommend it:

Right click on the application, then go to get info. There change the sharing & permissions to read & write for everyone. Then you can delete the application.

7
Can I delete any of the default apps the come with OS X?
11
How to delete the News app on OSX?
2
How can I remove a pre-installed application on macOS Sierra
2
How to delete unused apps like Stocks.app and Grapher.app from Mojave
1
How do we delete protected apps in Mojave?
0
How delete an application that is bundled with macOS?
1
consequences of `sudo rm` apps that shipped with the OS (like Photos, Messages, Mail)
5
Disabled mac os SIP but still can't delete default apps
3
How to remove Apple System Apps
5
How to delete pre-installed apps on macOS Catalina
See more linked questions

3
Can't empty the trash after deleting user account
0
How do I delete useless Apple Apps on OSX?
1
All applications got paused after disk space usage got near 99% and back to normal. What's next?
1
How to Uninstall System Apps by AppCleaner?
2
Is it possible and safe to uninstall pre-installed apps and to reinstall them when needed?
2
How to change app store user for pre-installed apps on a Mac?
1
How to delete pre-installed apps in Catalina?