Can anyone recommend an app for creating flowcharts and diagrams?

Google has been no help; I've followed dozens of links to apps that either don't exist anymore, I can't find any real reviews of, or that won't run on OS X 10.6.6.

What I'm not looking for:

I wouldn't actually use it for flowcharts, but rather basic similar diagrams to show data flow between apps, information flow in a company or other places, that kind of thing.

I recently found out that the drawing portion of Google Docs actually does a pretty good job with the types of diagrams I need to create, but the UI is pretty poor and it obviously requires a constant net connection.

If you can stretch your budget, get OmniGraffle for Mac. At $149, it's pricier than you'd like (do you possibly qualify for the $89.99 edu price?), but it's exactly what you're looking for.

On the lower end there's Mindcad Incubator for $10.99, but I haven't tried it myself and I'm not sure it does everything you want.

For free online diagramming there's diagrams.net, which I am a developer on. It supports the automatic connection and dragging of components you're looking for. Also, it's free (and open source), which meets your under $30 requirement.

There is also a Desktop version available.

The Google Docs suite of tools now has a diagramming tool that lets you create flowcharts. While not as feature rich as something like OmniGraffle, it does cover all your requirements: simple & clean interface, basic shapes (and not an overabundance of shapes), automatic connectors with elasticity, and it meets your price point at free.

Certainly can't hurt to try it out before you drop $100 on the Mac Daddy of diagramming programs for Mac.

Edit: just noticed your last paragraph in your question. Not much I can do about the UI, but I will mention that offline support is about to make a return via Chrome.

I found another one. Seems to meet all your prerequisites.

Shapes is a simple, elegant Graphing and Diagramming app for Mac OS X Snow Leopard. Shapes gives you all of the most important features you need in a Diagramming tool without all the extra cruft, and without breaking the bank.

Loïc WolffLoïc Wolff
14.4k44 gold badges4545 silver badges6464 bronze badges
1
Add a comment  |
15
Want to improve this post? Provide detailed answers to this question, including citations and an explanation of why your answer is correct. Answers without enough detail may be edited or deleted.

Dia is pretty useful. From the description: "Dia is a program to draw structured diagrams". Available for Linux, Windows, OS X.

The link above is to a GUI wrapper to the command line utility. With GraphViz, layout is automated, so you don't get to choose exactly where the nodes end up, although you can provide hints and have some limited control.

Regarding your other points:

I'm late to the party, but NeoOffice's drawing tool meets your four criteria. 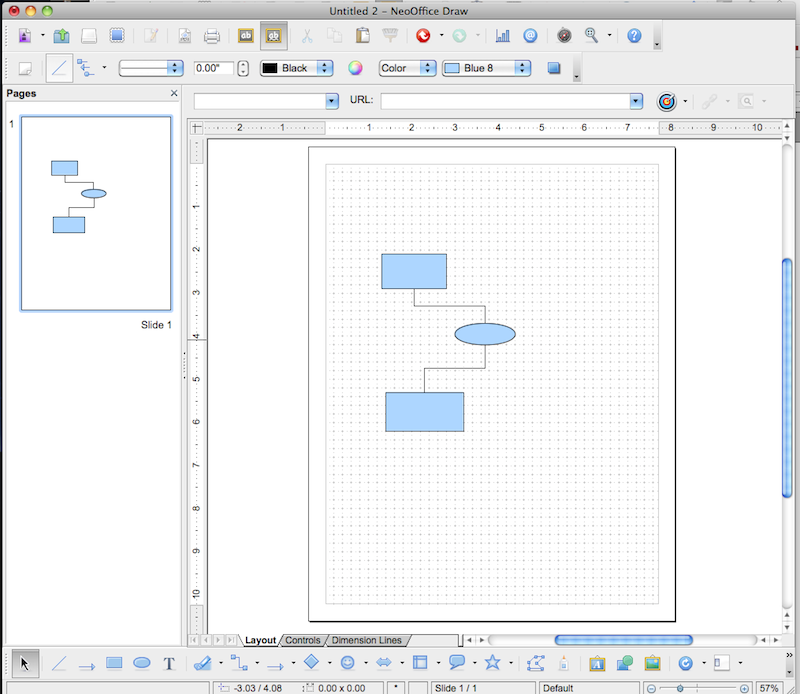 How about pencil? This is for fast prototyping.

I know this is an older thread, but I would like to throw in my $.02 (since things have changed some since this was posted). Lucid Chart for Google Apps is a viable solution. It is free for basic diagramming, and there are very reasonable pricing for more advanced features. It even has the capability to open (and save) Visio documents. It is integrated with Google Drive (for personal OR Apps Domains) and is real-time collaborative. Google Docs, of course, has a Drawing tool, but Lucid expands on it with some drag-n-drop features and other more advanced tools you would expect from fat-client apps. more information can be found on their website but if you search in the Chrome Web Store, you will find it and can install it directly from there. At that point it is as simple as logging into Google Drive and clicking Create and selecting Lucid Chart as the document type.

As a bonus, you'll have great presentation software to show off your cool new diagrams.

Take a look at the free and simple to use yEd, I believe this would fit about right for your 2 yr old question :)

Would MindNode fit what you're looking for?

There's a free version and and $20 version available. They're both on the Mac App Store.

Loïc WolffLoïc Wolff
14.4k44 gold badges4545 silver badges6464 bronze badges
Add a comment  |
3
Want to improve this post? Provide detailed answers to this question, including citations and an explanation of why your answer is correct. Answers without enough detail may be edited or deleted.

I love Gliffy. It's free and very user-friendly.

You also have several proposals from another SO thread here. OmniGraffle won the competition but the other links are quite interesting and could fit your needs.

Give Xmind a try. It's Java, so expect a Java applications… if you know what that means.

But given that you haven't found OmniGraffle very "attractive" for you, you might want to give it a try.

There is new diagramming tool Diagrammix in the Mac App Store. Simple and beautiful.

I see you that you need to draw flowchart with basic shapes and grids. I would recommend a web based solution since you are not always using it. But if you are drawing flowcharts frequently I suggest you to get an flowchart software like Creately. There is a mac version available and you can try for free

You can take a look at MyDraw (https://www.mydraw.com), which has versions for Mac and Windows. It costs 69USD and is in your budget. MyDraw has thousands of shapes for different diagramming scenarios (flowcharts, OrgCharts, UML, mindmaps etc.) and is packed with enterprise features like:

Disclosure: I work for Nevron

IHMC CmapTools is very good. You have to register for it but it is free to use and can run on all major OSes.

Create a project, add wireframe pages with design components and discuss your creations with others.

Your best solution is probably Inspiration. There's a free trial version available you can try out.

Since what you're asking for is an extremely simple to use program without advanced features and lots of shapes, I suggest Delinieato, available through the Mac App store. Delineato gets ideas out of your head and onto the screen with a few clicks. It includes specifically the features you asked for, simple shapes, easy to use connectors, connectors that flow with the shapes as you move them around the screen. Delineato also has an infinite sized canvas, allowing you to shift things around and expand ideas as neccessary.

Best of all, it's under $10 on the App Store for the full version.

Well, I read all the posts and tried several of these apps, as I was also looking for a flowchart tool. Go for Pencil (thanks Sangcheol Choi) It's amazing yet simple. Yes, it has a lot of shapes, but it also has a very intuitive search tool, and the MEANING of each of them, which many other apps don't have.... Sometimes, that's very useful, at least for people who do not deal with flowcharts every day, so we are not sure about the meaning of some less used shapes....

A diagramming application that allows you to create professional looking diagrams of all kinds, such as flowcharts, sitemaps, business processes, organisation charts, wireframes and many more....

A cross-platform desktop application that is available for Linux, Mac & Windows, as well as an online edition & iPad edition compliments its versatility.

This is a Premium application and the price varies depending upon which version who choose to purchase.

I'm really liking Gliffy. I'm a long-time user of Graffle and have tried a number of the other suggestions on this page. Graffle is great except for one crucial, deal-killing problem - it's orthogonal connecting line algorithm is terrible. I have to manually redraw lines almost anytime I move anything.

Gliffy is completely intuitive - everything pretty much does what I expect it to, and there are nice keyboard shortcuts for most things. I'd like to see symmetrical resizing (hold down option like in Graffle) so I don't have to re-center every time I resize a box, but that's a niggle.

The one feature I'd really like that none of these programs seems to have is the ability to expand or collapse a process block to reveal the flowchart of what's in the box. MacFlow under Mac OS9 used to do this, and it was wonderful: double-click a box and a new page would open, where you could flowchart the "nested" process. Close that window and the chart is hidden, but still there underneath whenever needed. Boxes with nested flowcharts had a bold border around them to let you know.

The ProcessOn diagram platform is completely free, and includes a drawing application that is actually fairly useable for creating diagrams and flowcharts at the simpler end of the scale.

Try Describio (https://www.describio.com). You can create runnable flowcharts using either the user interface or JavaScript (if you know how to code). You can also use user inputs to help control the flow. It's a more-advanced tool, but it's very useful for creating working prototypes. Check it out!

Why does nobody mention the excellent diagramming app - ConceptDraw?

If you're familiar with Microsoft Visio, this one is absolutely your choice. The only one problem is that it's more expensive than what you expect.

Hope you can have a trial and consider my recommendation.

You can actually do a lot of flowcharting stuff with Google Docs too. It depends on whether you're willing to pay for something or not. There's a good mix of both paid and free flowcharting software on Mac here.

You can try Edraw Flowchart for Mac. It's an all-purpose diagram software with all flowcharting shapes. I suggest it to you because I found it one of the greatest diagramming tools after I tried some. It has a simple and elegant interface that you will feel comfortable to work on. It also includes templates that you can choose from. If you are a student, you just pay half price. These are its main features: 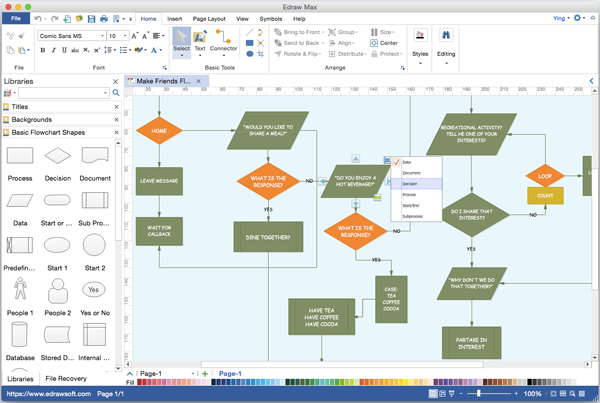 Not the answer you're looking for? Browse other questions tagged macos software-recommendation ui drawing .

2
Diagram Software
0
Free Tool for diagramming
1
What OS X app can I use for wireframing?
0
Paint replacement for MacOS