Can Applescript be used to automate a screen recording session on OS X?

I need to accomplish the following tasks from a script:

I've tried a few different approaches here and ran into roadblocks. One thing I've tried for example was a QuickTime script found here.

This script doesn't error, but it doesn't save anything either.

In the past I've used iShowU HD, but I've ran into significant performance issues there which have caused me to go back to the drawing board.

I'm willing to pay for a third-party application provided that it meets my requirements, so feel free to suggest anything that could get the job done.

It will make a new recording for 3 seconds (edit the delay 3 line to change the length), which gets automatically saved in the Movies directory of your Home directory, then closes the recording window.

If you want to automatically export to a different format, you can do that by adding the line export in ("" & (path to desktop) & "quicktimeFile.m4v") using settings preset "480p" before the close line. The presets you can choose from are defined in the File > Export dialog: 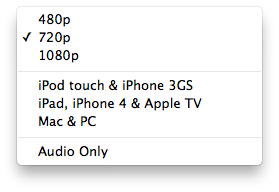 Check the actual dialog for further details on the presets (note that they are "up to" the resolution listed - it will fit into the horizontal pixels available, so "480p" gives you 640x400 for a 16:10 recording). As far as I know, you can't make custom presets.

If you want to capture your system sounds, and not mic/line-in audio, check out this question: Can I get system sound along with QuickTime Player screen recording?

For the curious, there are a couple notes about why the original script doesn't work and QuickTime Player's AppleScript peculiarities:

I recently wrote a script which does not depend on the version of QuickTime at all.

It just simulates actual user actions to save/export the movie. It takes as input the directory you want the movie file to be exported to, and the number of seconds you want to recording to go on for.

Check out the script (and the associated blog post) at http://www.neerajkumar.net/blog/2013/02/16/script-to-record-screen-on-mac-osx-and-save-on-disk/

Not using applescript but still useful; I found a solution that works really well. You're able to record with ffmpeg using an input device called avfoundation.

Not the answer you're looking for? Browse other questions tagged macos applescript quicktime .

5
How do I make multiple screen recordings with the exact same portion of the screen
4
How do you do command-line video screen capture on OS X with libav?
6
Can I get system sound along with QuickTime Player screen recording?

0
Applescript automate double keystroke
2
How do I use Soundflower with El Capitan on my MacBook Air and hear my computer audio while recording with QuickTime?
1
Applescript to automate process for screen cast setup
2
Quicktime Screen Recording heat problem
0
AppleScript quicktime to record iPhone screen
0
Applescript: Waiting till AFTER QuickTime Movie Recording Window is Active
2
How to screen record using AppleScript on Catalina?
0
AppleScript: start/stop QuickTime Player screen recording on timer