I recently bought a Mini DisplayPort to DVI and DVI/DVI cable to connect to my monitor. However, when I connect my MacBook Pro (late 2009) to the monitor it doesn't work - laptop screen flashes blue, but monitor stays idle.

The laptop recognises the monitor ('Displays' in System Preferences shows 2 monitors); but the monitor does not seem to recognise the laptop (it just continues to scan and eventually goes to sleep).

From testing out the combinations, I'm assuming that none of the cables are faulty.

From doing some research, I believe the DVI/DVI cable I bought is a DVI-D (Dual link), whereas my friend's is a DVI-D (Single link) - though that shouldn't make a difference should it?

The cables I bought: 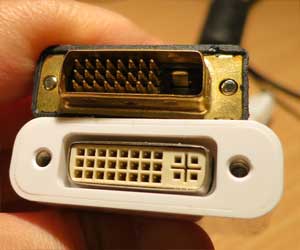 The cables I borrowed: 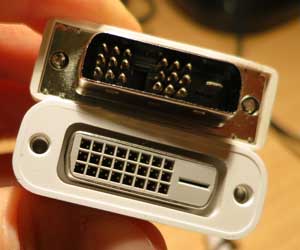 I still don't understand why the only combination that did not work was using the two cables I bought - any ideas?

Would also like to know if there is a way to get the monitor working with the cables I bought.

There's no reason it should work with a single-link DVI cable, but not a dual-link one. The second link is only needed for resolutions higher than 1920x1200x60Hz, and the second set of wires will otherwise be unused. In fact, a standard passive Mini Displayport -> DVI adapter can't use (or see) the second link.

You could check if a lower resolution works - if it does, this would indicate that the cables suffer from too much interference to carry high resolutions. This would be the case if they had cheap/bad shielding. If both your adapter and the DVI cable are very close to the minimum required shielding, it could cause problems in combination but work OK when combined with higher quality cables or used on their own.

The monitor has a separate power (D-plug) source, and I've tried restarting, rebooting and checking the monitor settings. The song remains the same. Unless that USB cable is plugged in, the signal doesn't appear on the second monitor.

Not the answer you're looking for? Browse other questions tagged macbook-pro displayport dvi .