"Too many open files" - how can I set the ulimit -n value for emacs on Lion? [duplicate]

I've seen other questions covering the topic of how to set the file limit on Leopard/Lion.

How to properly increase ulimit -n on Lion?
Too Many Open Files

But after reading through those I'm still not clear on how I would set the open file limit for my instance of emacs. Can anyone explain that to me?

It seems to me that ulimit -n sets the limit for the current shell. That won't work for emacs, because emacs is not a shell. Also, apparently launching emacs from the shell would allow the ulimit -n value for the shell to apply to emacs. But I would like to not invoke emacs from a shell; I'd like to just click the pretty icon.

Also there are some other ways to modify the open file limit but I am not clear on exactly where those limits apply. At least one of the limits applies to "all open files on the operating system" and for my purposes that is much too broad a brush.

I want to know how to set the file limit for a specific app. Chrome, Emacs, or whatever. In my particular case, I am interested in emacs but I guess it would be a generic solution.

[I tried tagging this with ulimit but could not, because I am at 101 rep right now] 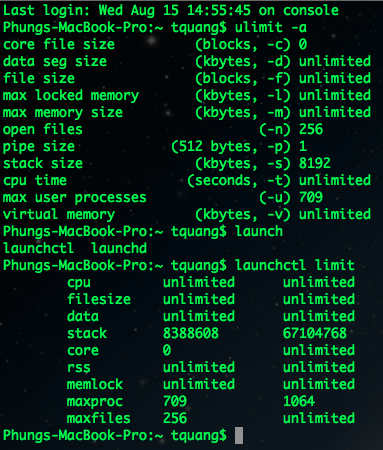 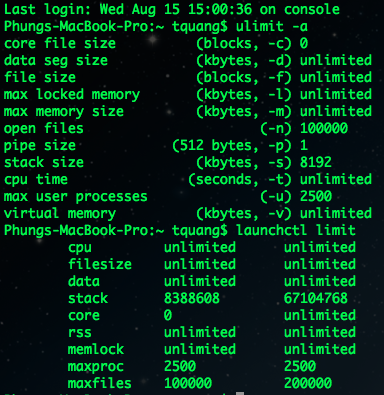 Not the answer you're looking for? Browse other questions tagged macos emacs kernel terminal .

19
Which command controls the open file limits?
9
How to properly increase a `ulimit -n` limits?

19
Which command controls the open file limits?
4
How to debug "too many open files"?
8
How to get a "modern" emacs that runs in a terminal on os x lion?
3
How to get Ctrl+return key binding for emacs in iTerm2 working?
1
open multiple files in one emacs window
16
In OSX Yosemite, why can I set many environment variables for GUI apps, but cannot set the specific variable PATH
2
Determine which app is opening too many files
1
How to check max allowed open files (ulimit) of a running process (or running app)?