For a startup volume encrypted with Core Storage, System Preferences show that FileVault is disabled

My iMac has a SSD and a HDD. The OS is installed on the SSD.

I performed a clean installation of Mountain Lion to the SSD, and cloned my SSD using a backup from my Time Capsule in OS X Recovery.

System Preferences show that FileVault is not enabled.

When I follow the routine to enable FileVault, after the iMac reboots it gives me the following error:

How can I enable FileVault on my iMac?

Is there a way to reset the partition without having to reinstall and reconfigure my system?

A screenshot of the errors when I try to enable FileValut: 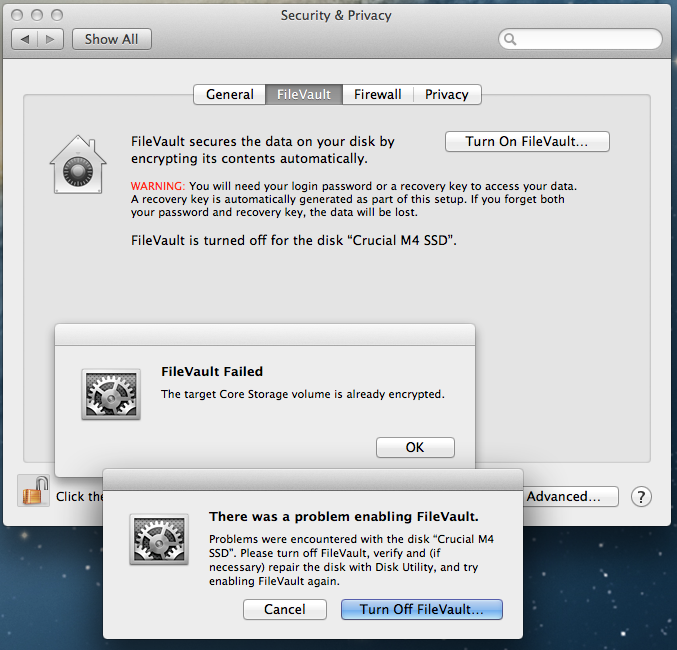 Use the Security & Privacy pane of System Preferences. In the FileVault tab, click Enable Users… then in the sheet, ensure that all required users are enabled.

System Preferences may show that FileVault is enabled, with a recovery key, when there is encryption with Core Storage, but neither FileVault 2 nor a recovery key. I reported this bug to Apple a while ago.

Similarly, but not the same bug:

Ensure that the utility is applied:

(Where Core Storage is used, Disk Utility in 10.8 can not show the physical disk.)

If you select the LV alone, then verification will omit the partition map.

If encryption was applied when the volume was created (typically: erasure with Disk Utility) then:

As the LV is already encrypted, the response from diskutil is correct.

The question in Apple Support Communities

From the opening poster:

Does the resolution there in ASC, the bounty here in Ask Different, mean that Dennis continues to seek a more detailed answer, a better resolution?

-69755 appears in another discussion:

Not the answer you're looking for? Browse other questions tagged macos terminal disk-utility filevault recovery .

3
What techniques for disk, volume and file system management are possible with OS X, but troublesome within Disk Utility?