Why won't my AppleScript run as a Service?

I have a simple AppleScript that works exactly as expected when run on its own, ether as an app, directly from within ScriptDebugger or Script Editor, or as an element of an Automation from within Automator: 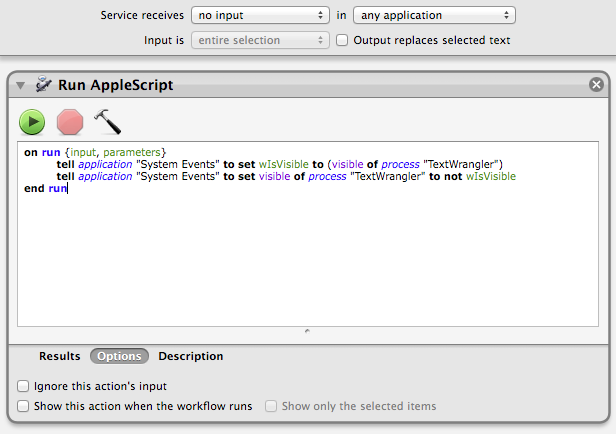 However, when I attempt to run this Automation as a Service, for example by saving it as a Service and running it from the Services menu

nothing happens. The Service fails to run whether I use a "Run AppleScript" action in Automator, or create an application from the script, and use a Launch Application action.

Why won't my AppleScript run as a Service, when it runs perfectly in all other circumstances?

This is weird, but I have seen at least three people on Apple Support Communities who had this problem when a of process "x" and a tell application "System Events" to are on the same line.

Not the answer you're looking for? Browse other questions tagged applescript automator services .

3
Passing selected folder path to custom Service executing AppleScript
4
Why does my Automator service work in Automator but not when called from the OS?
2
Saving Applescript Removes Characters
8
Can only run AppleScript from Automator
7
Automator service not showing in services menu
2
Cannot print period ('.') from simple AppleScript to VMware Fusion virtual machine
0
Automator "New File" workflow in Mojave returning “Not authorised to send Apple events to System Events.”