With Google Chrome, I was watching YouTube video fullscreen – Flash content. In the middle of video, I wanted to exit full-screen mode but neither the keyboard nor the trackpad worked. The video continued playing fine. At last, I forced the system to close and restarted.

Today I was just chatting in Messages and suddenly everything froze. I was able to move the cursor but nothing was happening.

Has anyone else faced this issue, or found a solution?

Update: If I connect my mobile phone (HTC Wildfire S) to my MacBook Pro using USB, the Mac freezes every time while removing the USB connector.

The symptoms you describe are familiar but not commonplace and in my case, not frequent.

In Terminal, run the following command. Be prepared to enter your admin password for the operating system:

When the problem occurs:

After the computer starts:

Folder contents at a glance

In the first screenshot below – an example of a completed run of sysdiagnose - I have selected two of the items that may be of interest in a case such as this. 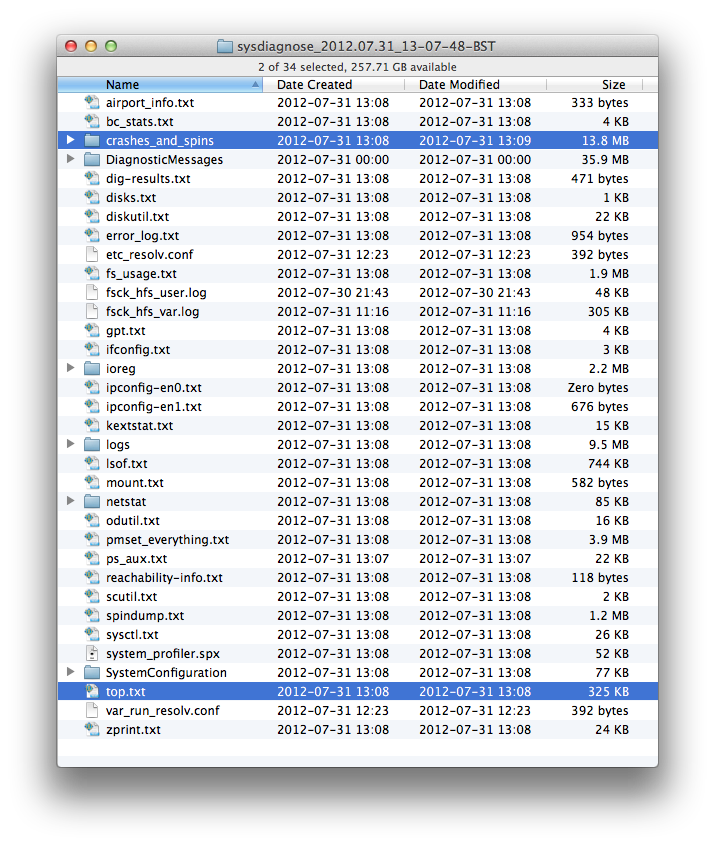 Note that it may be normal to find at least one empty file.

Amongst the .crash, .hang and .spin files – or in the top.txt file – might be a good sign of what was wrong shortly before, or during, the period when you lost control of the computer.

This is because of the Android File Transfer App. Uninstall it and the problem will go away.

Still I think google should address this..

Not the answer you're looking for? Browse other questions tagged macbook-pro macos usb hang .

27
How do you get system diagnostic files from macOS?
19
How does 'stuck' (in results of 'top') relate to 'not responding' (in Activity Monitor), 'spin' or 'hang'?
11
How to stop MacBook Pro (Retina) from freezing/locking at the login/authentication dialogue, after wake?
6
MBP 17" (2010) goes to sleep and can't wake it up
4
With Firefox Aurora, Mountain Lion hung - but the mouse still worked
2
Mountain Lion sometimes hangs when mouse enters Dock – pointer is movable, but the MacBook Air seems otherwise frozen