What techniques for disk, volume and file system management are possible with OS X, but troublesome within Disk Utility?

In the past, Disk Utility was the best starting point for the vast majority of disk-related tasks.

As technologies within (or possible with) OS X have developed – without equal development of Disk Utility – so it may be useful to have:

I'll seed at least one answer to exemplify what I have in mind.

For some of the things mentioned, there will be answers elsewhere in Stack Exchange – so here, commentary may be minimal.

Maybe more noticeable with Mountain Lion than with Lion:

Recall that features such as Core Storage and FileVault 2 are relatively new, and without native support in Snow Leopard, so let's be gentle in our observations – for any peculiarity, assume that an overriding mantra of 'first do no harm' is applied by Apple.

A redesign of Disk Utility, by Apple, is desirable but that will be beyond the scope of Ask Different so please: no design suggestions here.

http://forums.macrumors.com/posts/22209602 for a public record of what was originally a private enhancement request (ER), made through AppleSeed in 2012. 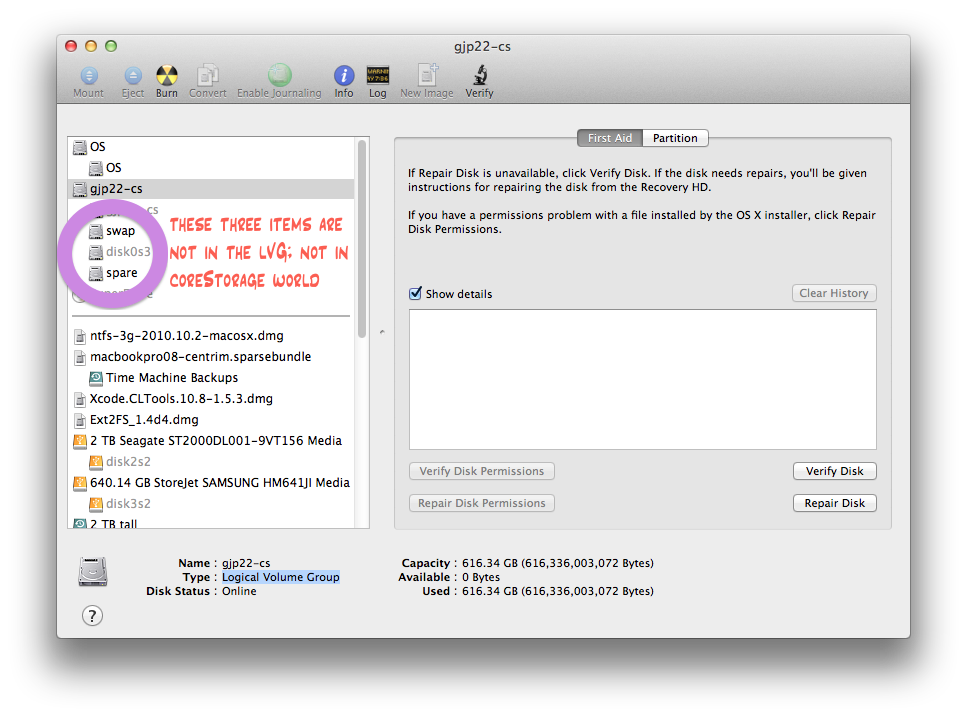 Volumes swap and spare are JHFS+ and truly not within the LVG.

disk0s3 is an Apple_Journal, currently unused and truly not within the LVG.

Disk Utility misrepresents all three as being within the LVG.

A physical disk may be invisible

S.M.A.R.T. status may be invisible

When Disk Utility can not visualise the disk:

For users who see this as a regression in Mountain Lion: there are workarounds.

With Lion and Mountain Lion, when the Partition tab of Disk Utility in Lion can not manage a partition on a physical disk that uses Apple Core Storage:

With Mountain Lion, disappearance of the physical disk – presentation of an LVG in its place – may be an additional source of confusion.

Apple does provide some non-Finder alternatives for advanced users to show items that would otherwise be hidden, or provide extra options:

The majority of users just need to back up, restore disk images and (visible) volumes. I doubt the average user even bothers with software raid or partioning.

I have a feeling none of this info is news to the original poster (and doesn't address the actual question, to be honest), but maybe others will find it helpful.

Not the answer you're looking for? Browse other questions tagged macos disk-utility filesystem core-storage .

54
Can I make a DIY Fusion Drive?
16
What features from Lion will be lost when upgrading to Mountain Lion?
21
One mac, Two or more storage devices - how to divide things?
4
What are the purposes and safety to enable the hidden debug menu in Disk Utility?
2
How to install Mountain Lion on a disk that cannot be formatted in recovery mode?
2
For a startup volume encrypted with Core Storage, System Preferences show that FileVault is disabled
1
Disk Utility Error "Storage system verify or repair failed"

1
Can Disk Utility and Disk Warrior be used on a Fusion volume containing Mac OS X
3
How to tell which files are entirely or partly within a band of a sparse bundle disk image?
8
How to format external drive into ZFS?
3
Can I have both a case-insensitive system volume and a case-sensitive volume within an encrypted CoreStorage volume?
1
Why does Disk Utility show one "Macintosh HD" as a logical drive and another that says core storage physical volume
0
Why does Disk Utility show "Macintosh HD" on both Logical Volume Group and the volume underneath?
1
For the purposes of archival uploading to Google Drive/Dropbox/Etc, what are the differences between DMG and SparseImages?
5
Mount APFS Volume to /Users with the Disk Utility during the installation
13
Creating an image from a Time Machine backup – "Operation Cancelled"
1
corrupted files, fail checksum but , disk and FS checks with disk utility