I know is possible to have multiple versions of Java on OS X but i find it difficult to understand how it works.

I upgraded to Mountain Lion and now echo $JAVA_HOME is empty.

So why all those versions are used for if they have same version of Java?

Then I downloaded the JDK 7 from Oracle and installed it.

Where a new JDK is usually installed?

And final question : How can I choose which version should run by default by all applications?

In Win. I set JAVA_HOME to the C:/ProgramFiles/Java/.… I put in Path : location to JAVA_HOME/bin and that's it.

For most use cases, CurrentJDK should provide the functionality of current and past versions of the JDK.

Not all past versions, but the versions most commonly required:

Preferring a version of Java

Use Java Preferences in the normal way.

Depending on what you have installed in addition to Apple's distribution of Java, the first tab of the utility may appear a little different.

An example, without the familiar options for applets and Java Web Start: 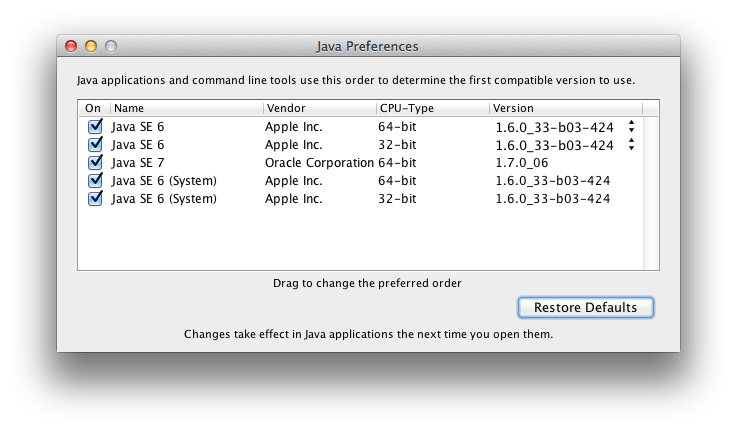 The /usr/bin/java placeholder app makes use of these settings run the preferred version of Java.

Finally when configuring JAVA_HOME in a launch script for Tomcat or Maven you can hook into the preference system:

Answers elsewhere note that Java may be installed at several paths –

– but for what's currently described in the question here, the JDK from Oracle on Mountain Lion, only one path is likely.

Paths used for installation of JDKs

Other paths may be used but for the current JDK from Oracle, installed to Mountain Lion, you'll probably find the .jdk bundle at that path.

32
How can I switch between the two Java versions in Mountain Lion now that Java Preferences is gone?