I installed Mac OS 10.7.4 on my MBP last night, along with Safari 6. I was leery about installing Safari 6, but I figured I could cope with the changes. But, after using it for about 30 minutes I want Safari 5.1.7 back.

My "plan of attack" was to download the 5.1.7 installer, delete Safari 6, and install Safari 5.1.7. After the installer finished downloading I ran sudo rm -rf /Applications/Safari.app. As expected that deleted the application file. However, when I opened the 5.1.7 package installer I get the following error. 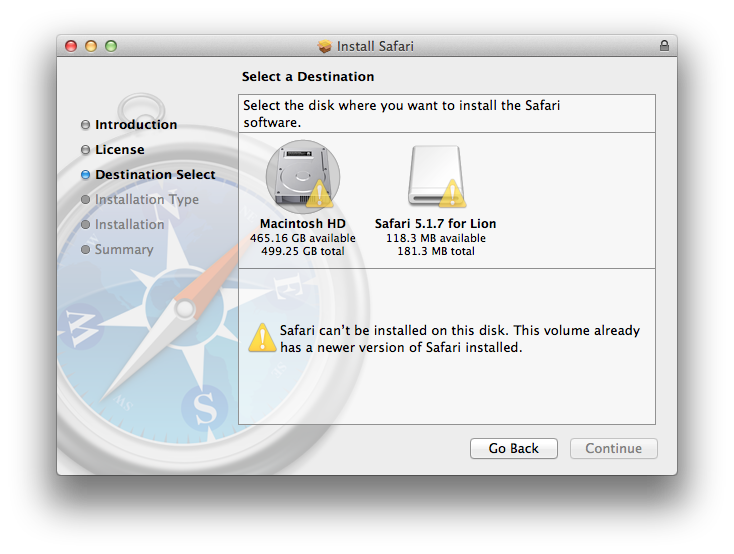 I decided that the best way to get Safari 5.1.7 back was to reinstall Mac OS 10.7.4. But before I run the install I have a couple of questions.

First off, double check your backup situation and be ready to use it to restore your data onto a clean 10.7.4 install if needed.

Your idea to delete the safari app and then re-install the Combo Updater is a great one and I have used it to great success in many cases where people managed to delete Safari in the past. The client combo is the correct update for you. (Client is correct as opposed to the server version of the combo updater)

It is not guaranteed to work (and I haven't tested it with Safari 6 having been installed and 10.7.4 yet so you could encounter a dragon but if your alternative is to do a clean install and skip the upgrade to Safari 6.0 you don't have much to lose by trying the combo updater trick.)

Watch the install logs to be sure that the Safari installation isn't skipped due to detecting a newer version. If that happens, you'll have to much around in the /Library/Receipts folder and potentially the receipts database to remove the recipt that tells the system what version of Safari was installed in the past.

Reinstalling the OS just for Safari seems a bit drastic. The reason it says that is probably exactly because you used rm -rf as opposed to dragging it into the trash.

In OS X there is a central registry of installed applications, and afaik when you drag an application to the trash, it is automatically removed from this registry. When you just rm -rf it will delete the files but not the entry in the registry.

So I'd try : reinstall Safari 6 normally, then drag it to the trash. This should remove it from the registry, so try to install Safari 5 afterwards.

If all you want is the old Safari.app I would suggest using a tool like Pacifist to open the .pkg and install just that component rather than jumping through hoops.

However you should also be aware that the Safari 6 update may have installed a newer version of WebKit and other support frameworks that simply won't work with Safari 5, in which case you'll have to try to install the full 5.x pkg and overwrite the newer frameworks (not recommended though!). Pacifist ought to be able to do such an install while bypassing the usually Installer checks but...

...If you'd prefer to run the checks and use the system's Installer.app I'm pretty sure you need to clear out the Safari 6-specific receipt that tells OS X that it was previously installed. I'd imagine that's what the Safari 5 installer is checking but I haven't tested at all to see if this is indeed the case.

Not to call out houbysoft particularly but I doubt the reinstall issue is related to lsregister though, since (as evidenced by its path) I'm pretty sure that's only related to LaunchServices (ie. the service that decides what apps will show in the Open With menu for documents) rather than app installation.

Anyways, rather than retyping, this answer about Java uninstallation (starting with the "clean up the installer records" section) provides a good list of the steps to take and places to look for the installer files, substituting Safari for Java of course :-)

Or, alternately, be zen about it and learn to live with Safari 6 instead of making work for yourself ;-)

Not the answer you're looking for? Browse other questions tagged macos mac safari .

3
How do you get a program to load earlier when you log in to Mac OS X?
1
CCID installation El Capitan
1
Can't download El Capitan from Appstore. Constant Spinning Wheel
3
Mountain Lion reinstall failure
5
Problem while updating to macOS High Sierra (Target is not convertible to AFPS)
3
Where does Safari store passwords?
0
Re-applying ComboUpdate to Sierra after later SecurityUpdates are installed