Will Mountain Lion run on an early 2008 MacBook White?

I know it isn't in Apple's list of supported Macs, but I want to know if anyone has tried it.

Also, my Mac has 4GB of ram and plenty of disk space. It currently runs Lion.

As Steve Moser says there is no support for 32 bit drivers and Mountain Lion will refuse to install on the macs which had 32 bits drivers (someone seems to be too lazy to rewrite them?).

If this answer is not the one you want to hear, then you can install Mountain Lion the hard way. Because there is a way (which worked for the preview).

You will need another compatible mac (support) and you will have to do some hard drive switching.

You should be able to get to the desktop but without hardware graphics support.

To enable the graphics hardware support you will have to install the right kernel extentions. You could use kexthelper.

EDIT: To avoid all the hard drive switching and messing with internal components you can boot the target Mac in the so conveniently named "target mode" and connect it to the support Mac on which you could install the OS to the target drive and then boot on the target drive to edit the plist files. 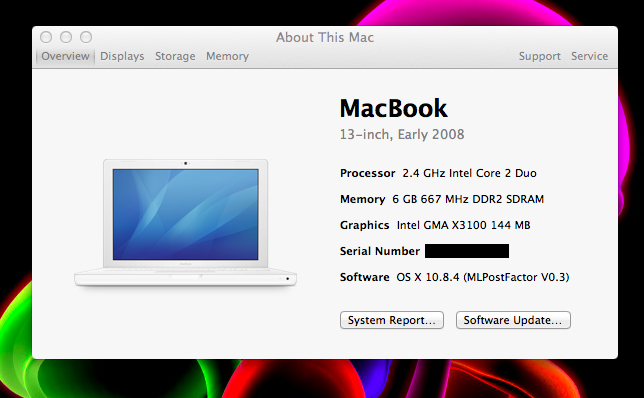 Mountain lion will run on a early white MacBook. Below is a screenshot of my Mac for proof, also you can max the RAM out at 6GB

Not the answer you're looking for? Browse other questions tagged macbook-pro upgrade macos .

0
Which OS X Lion features would not be available on a late 2008 MacBook model?
2
Any issues upgrading a MacBookPro4,1 (Early 2008) to Lion?
9
Can I use 16GB DDR3-1600MHz RAM in an early Macbook Pro 8.2?
4
OS X Lion behaving oddly after upgrading to 16GB RAM
1
Which Macs cannot upgrade to Mountain Lion?
1
Mountain Lion on Intel Core 2 duo (2009 macbook pro)
1
Is it possible to configure (or trick) internet recovery to load Lion instead of Mountain Lion?
0
How to install Windows XP on mid-2012 MacBook Air Mountain Lion?
1
New Corsair ram beeping on late 2008 MacBook
3
Upgrading MacBook Pro mid-2009 RAM