One thing I don't care for though is that now, three-finger tapping links—or anything, for that matter—brings up popups with the definition of the word that was tapped.

This is less than convenient since I'm using MiddleClick to set that particular tap gesture to act as a middle-click.

Is there any way that I can disable this behavior?

In System Preferences under Trackpad then Point & Click, uncheck Look up. 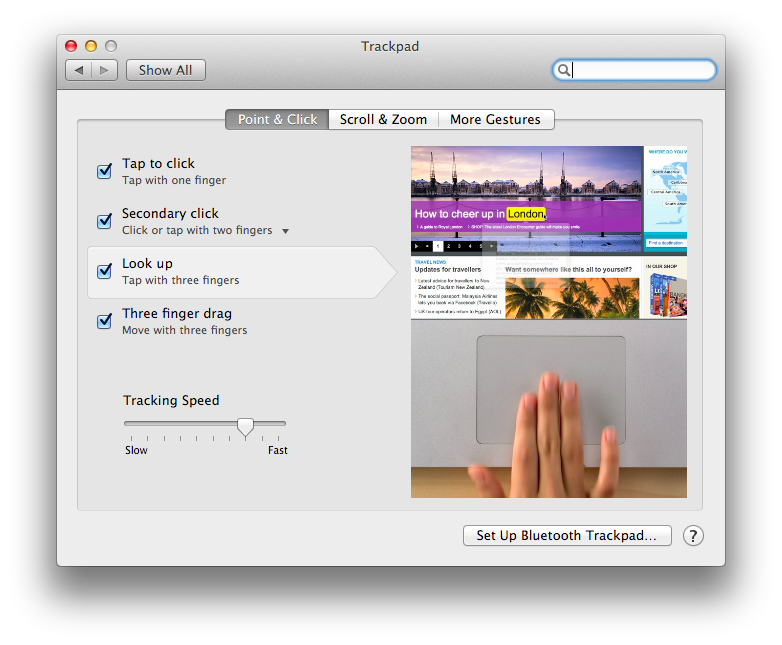 I am not sure what "middle click" is, it sounds like some third party utility, so until we know what you mean by this and what it is supposed to do, I can't really help on that front.

One thing I would say though is that there is a difference between a 3 finger tap, and a triple tap, Most people would mean a triple tap to mean tapping 3 times, in the same way as double click means clicking twice. For clarity, I am sure you mean a 3 finger tap (all three fingers in one go with one tap) - it's a minor point, but will help you to define the problem better.

If, after disabling the 3 finger tap lookup feature in Daniel Lawson's answer this stops the dictionary lookup, but doesn't then allow your MiddleClick utility to use it, then is might suggest that it is simply not compatible with Mountain Lion, and I would check with the developer for support.

Just discovered this glitch going from Lion to Mavericks. A good work around is to map it to 3 finger click. That seems to work fine.

Note, I'm using BetterTouchTool which is a much more powerful gesture and keyboard binding tool. Since it experiences the same issue, it's likely this is a bigger problem than just buggy software.

Not the answer you're looking for? Browse other questions tagged mac macos trackpad .

5
How can I fix the OS X dictionary lookup feature for StackExchange comments in Google Chrome?