What are the maximum temperatures for my MacBook Pro?

I have this MacBook Pro (3,1). I know there are maximum temperatures at which the system will shut itself down in order to prevent damage. I know this because I have seen it happen a couple of times

When I run Windows, apparently the OS doesn't care to throttle power in order to reduce dangerous heat like Mac OS X does. I now have a program that monitors CPU and GPU heat when I run Windows 7, and it will sound an alarm if they reach a pre-set ceiling.

My question is, how do I know what the emergency shutdown temperature is so I can set the alarm limit appropriately (low enough to trigger before catastrophe, but high enough that it doesn't trigger when things are still okay)?

This page from Intel seems to be telling me that the CPU should not go above 100°C ...does that seem like the number I'm looking for?

Nvidia doesn't seem to say anything about temperatures on the product page. User forums seem only to speculate on what is or isn't safe with no real specifications to back them up.

How can I find these numbers, either from Intel & Nvidia, or from Apple? Or, is there a general ceiling that I can go by to make sure my alarm warns me before an emergency shutdown?

Typing was about 200% slower—around one word per minute—but I was playing a Flash-based game and have noticed the game raises the temperature to around 90°C in about 5 minutes of playing.

So I think the maximum temperature is around 110–120. Then it shuts off automatically.

I frequently have my macbook around 80 degrees c (when rendering video), having a program like smcfancontrol can be used to manually raise the fan speed, and help lower CPU temperature in advance of a period of high CPU usage. I find that the shut off point of my macbook seems to be around 90 degrees

I monitor my graphics card, CPU, and HDD temperatures and elevate the fan speeds (with SMC Fan Control) if one of them exceeds that.

60 degC is (rough rule-of-thumb) the hottest temperature we can stand to touch, and in the absence of published specs, I arbitrarily took that as a conservative upper limit, assuming that materials can stand a higher temperature than I can. While it may be unnecessarily conservative, it's not likely to have the consequences an insufficiently conservative limit would have. 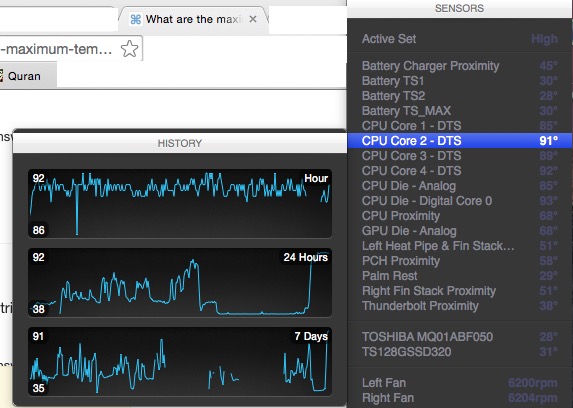 the info is here: http://support.apple.com/kb/SP13 scroll down to "Electrical and environmental requirements"

That's the outside temperature you should operate it at or use it, not the internal temperature.

Not the answer you're looking for? Browse other questions tagged temperature .