I'm trying to give my server a static IP address (it's connected directly to the base station) but it's an old base station, (Airport Extreme 802.11g) so there's no obvious way to reserve an IP address (equivalent to the DHCP Reservations panel on the more recent base stations.) For example, the information here is very clear, but my Airport Utility shows no such reservation panel.) Am I out of luck, or is there another way to do this? 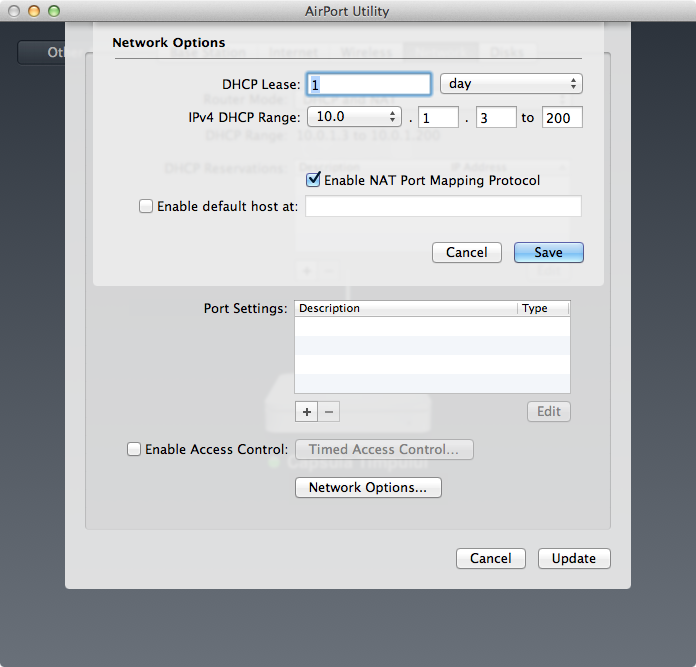 All AirPort base stations set up their internal NAT gateway code for a full /24 network (10.0.1.x by default). That means that IP addresses .2 through .254 are available for machines connected to the network. But all AirPort base stations configure their internal DHCP servers by default to only serve out addresses .2 through .200 via DHCP. This means that .201 through .254 are already set aside for manually/statically configured hosts.

Just manually configure your server machine to be on one of those upper 54 addresses (.201 through .254) and it'll just work. Heck, even if you manually configured the host to use one of the addresses that the base station's DHCP server usually hands out, the base station will be smart enough not to try to serve out that address to some other client while your other machine is using it.

The UI you see on later base stations is a way to make the base station's built-in DHCP server give the same host the same IP address lease via DHCP each time, based on the host's MAC address. That's convenient if you have a laptop that you take to different networks all the time, and want to leave that laptop configured for DHCP. But if you have a machine that's going to be on your network all the time because it's a server, you can just configure that server machine's IP address manually, on the server.

Letting other hosts on the Internet get to your server is a separate issue. For that, you have to set up Default Host (some other products call this "DMZ") or Port Mapping (a.k.a. Port Forwarding).

Not the answer you're looking for? Browse other questions tagged network airport .

2
AirPort Extreme: Keep IP address from changing
1
How can I ping a given host behind an Airport Extreme Base Station
0
AirPort Express extending connects in the wrong order
1
How to connect to modem setup as bridge through Airport Extreme?
1
Can't add DHCP Reservation with Airport Utility
3
What ports need to be opened to use the L2TP VPN server on Mountain Lion Server?
3
Can't see A1084 AirPort Express behind A1354 AirPort Extreme
0
Airports, Wifi Roaming, and Ethernet Backhaul
0
How to setup DMZ with Airport behind a router (double NAT issue)?
2
Creating a network larger than 200 IPs