Upgraded my HDD to SDD. Can boot successfully via USB but will not boot when in MBP

I have a late 2011 macbook pro. I decided to upgrade to SSD. Here are the steps I took:

I then rebooted (holding CMD + R) to select my new SSD as the boot up drive. This worked fine. To test this fully I created some files on the desktop and restarted several times switching between SSD and HDD to verify that I was actually booting up into SSD.

I can boot up via SSD with the HDD in the MBP and SSD connected via USB. But when I remove the replace the HDD with my SSD and power it on, all I see is the apple logo and the spinning wheel forever. For some reason, I cannot boot up when it has been fitted inside.

Any ideas why this may be?

Further on from this, I can't boot into the recovery partition and I have also cloned the them switched around (SSD internal, HDD on USB). This cloned fine but still presented me with the same problems. Attached is the CMD+V output from booting up with SSD inside. 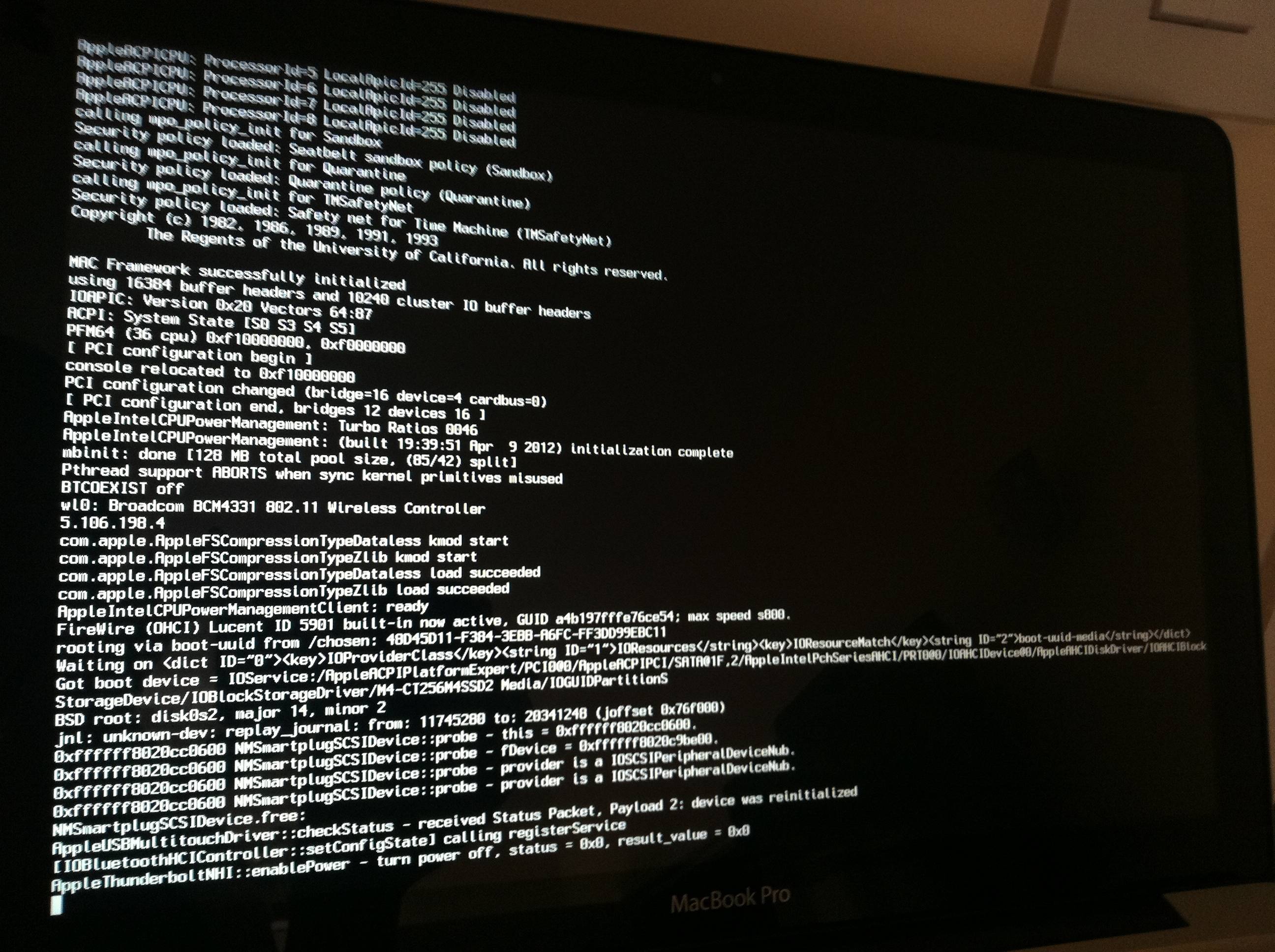 Thank you for all the responses. I believe I have tried everything and have lost count of how many time I have switched the drives, formatted and reinstalled the Lion.

I figured out the problem, in the end, it turned out to be a problem with the firmware. The firmware on the drive was not compatible with late 2011 MBP and needed to be downgraded. After downgrading the firmware to 0309 it worked like a treat!

Thank you for all the responses, most appreciated. I hope this helps some people out.

I know it might sound simple, but have you tried holding down Option while booting and seeing if the drive is visible to boot from. If so, select it.

If you tell the Mac to boot from a drive that is on a certain port or connected a certain way, and then move it to a different port or connection type, i.e. from USB to SATA in your case, the computer itself won't know that you made the move. It will look for the USB drive that is was booting off of because that is where you said to look.

I had a similar issue when it came to booting off my new SSD in my MacBook Pro. I told it to boot off my SSD when it was in a original HD SATA Port and then moved it to the place where the optical drive was using an OptiBay, putting the old HD back in its original bay so that I have two HDs. It booted up and spun for about 30 seconds, way too long for an SSD, and then found the old drive that I still had in the original HD bay, it never found the SSD because it wasn't where I had told it it was, so it then went and looked for things it could boot off and found the old HD before the new SSD.

Try holding the Option key while booting and see if you can find your HD and boot from it, once you do, set it as the default boot drive in your system preferences so that it knows that its supposed to boot off of it.

I hope that this helps.

I had this issue also but discovered that Carbon Cloner gives boot priority to the Connection used to clone the drive i.e. USB. (If You Clone the drive via usb it will only boot via usb)

So I removed the main drive, inserted the drive I wanted to clone into the main slot, and cloned the old drive by connecting it to USB with the new drive in the main terminal. This worked perfectly and I have no issues with the cloned SSD not booting.

I'm battling the same problem with my Mid 2007 (7.1) iMac running Snow Leopard. Cloned new 2 tb Seagate SATA drive in a external USB enclosure, removed 300gb Hitachi Deskstar internal drive (probably not the original) and installed the "booting when USB" Seagate in the internal mounting. Will not boot either drive, new Seagate as internal and won't boot the previously internal Hitachi in the USB enclosure. Only get the Apple logo and the spinning "wait" progress icon. Holding the option key does nothing at all, cannot boot into Open Firmware, cannot boot into safe mode with the shift key. I decided to order a new Snow Leopard CD/DVD and will install the OS from that onto the new drive in the internal position.

If you cloned the drives, the content and name is the same. Try changing the name for the SSD to make sure the computer isn't changing to the HDD after unsuccessful booting from SSD via USB.

Try booting from your HDD via USB while the SSD is connected internally to the MBP and clone the drives again to be sure the SSD works correctly while connected to the MBP directly.

I have done something very similar recently. Although I was using spinning disks and not SSD. But for you it sounds like your SSD is working fine because it is working when it is on the outside of the computer.

If the above options aren't working with your set up I would suggest trying "SuperDuper" as your cloning tool. It worked great for me recently to move up disk sizes. The procedure I followed was exactly as you describe.

Not the answer you're looking for? Browse other questions tagged macos macbook-pro ssd .

2
Does cloning with SuperDuper or Carbon Copy Cloner clone everything from a HDD to a SSD?
2
Macbook Pro boots successfully when using hard drive in USB enclosure but doesn't boot when connected internally
1
Installing an SSD in a MacBook Pro mid 2010 but OS X is on an external USB HDD
1
Boot menu not working
3
SSD in a MacBook Pro (mid 2012, 13"), Finder symbol with question mark
1
Cloning my SSD into bigger one
1
External drive with OS X 10.13.2 will not boot from USB 3.0 enclosure
0
Can't boot High Sierra from my SanDisk SSD
2
iMac Intel 21.5" EMC 2805 Looping chime on booting