Can I lower the minimum display brightness? How?

When working late, I'd like to lower the screen brightness further than the OS X allows in using the brightness keys.

While you can use ⌥+⇧+F1/F21 to change the brightness in smaller quaterish increments, this does not have an effect between 0 and 1 bars.

In Ubuntu I've accomplished very low brightness settings by manually changing integers in the configuration files. Is there something similar that I could do in OS X? 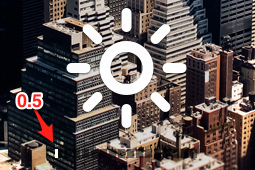 1 - This works for the volume the same way.

Another application for decreasing brightness is Shady. But like Shades, it just draws an overlay over the screen and doesn't actually turn down the backlight.

There is a small Objective-C utility (https://github.com/nriley/brightness/) for changing the brightness of displays, but it cannot set the brightess below the normal minimum value either.

There are several decent Mac software screen dimmers out there, of which I've found the ones whose dimming method is to apply an increasingly opaque black 'overlay' over the screen to be the most superior in appearance (providing much higher quality 'low blacks' than Shades which does its dimming via color profile/gamma level tweaking) and in doing so, also playing nice with famous color temperature regulating app, f.lux.

The best examples in this group, are Shady (whose development has been abandoned by its dev and has a no better rogue clone in the Mac App Store), ScreenDimmer, Screen Shade, and Work at Night. (N.b. these last two, confusingly appear to be clones, by the same dev on the Mac App Store.)

But if you're looking to more fully emulate the Mac's in-built hardware dimming in software, you're looking for an app that can have the dimming triggered via hotkeys, system-wide.

So for all the above criteria AND having keyboard shortcuts, the only one I have found is the humble Softonic-hosted ScreenShade, est. 2008!

It's working on Yosemite 10.10 no problem, and has a decent little preferences window including even customisable support for multiple/secondary monitors! Its only drawback, is that the hotkeys' granularity in dimming up and down is a little less than one would ideally want (i.e. the jumps are fairly large), but this is a small concession given it at least provides hotkeys, and it does go down to very low levels (with fairly good clarity), all the same.

So until contenders like ScreenDimmer, Shady, or Screen Shade / Work at Night do anything about it, if you want something with hotkeys and simultaneous operation with f.lux (and to do it in software), this looks to be only app that can do it.

DISCLAIMER: Modifying kexts has risks and can mess up your mac. I am not to be held responsible if your your OS breaks.

You can change that string to get a wider range of brightness, e.g.:

Make sure to allow OSX to load the modified (unsigned) kext by entering this in Terminal:

Note: the 0710 at the end of the data is the maximum brightness allowed by my HD3000, meaning my color control can go much darker and brighter than stock. I also want to point out that the values are given above are not linear at all, I'm too lazy to work on the steps right now. But the idea is to get your desired minimum and maximum values and enter the proper values in between if you want a smooth transition.

QuickShade, available on Mac App Store is a great very simple solution. You can add keyboard shortcuts to it (I picked Fn + Option + F1/F2).

Check out the app called Shades:

Though all modern Apple laptops have brightness controls for dimming the screen in dark conditions, there are several situations where the built in controls are unsatisfactory. The granularity of control is rather coarse, and the minimum brightness setting still quite bright when working in pitch darkness. Perhaps you need to use your machine in a darkroom, or like to work late at night without disturbing your partner who sleeps beside you? Perhaps you need to dim the screen on a desktop machine, and the display you are using offers no such facility? If this is the case for you, then try Shades.

Note: Shades may interfere with colour calibration software, and should not be used if colour accuracy is critical.

My iMac has a "fault" in that the lower I set the brightness, the noisier the screen buzzes, due to an issue with the capacitor that does the work. But using this app I can get the brightness down way further than using hardware controls on the backlight, and the buzzing is not introduced either. Double result!

No longer maintained nor available

A newcomer here is Desktop Dimmer, an open source project hosted on GitHub.

It is currently actively developped and provides slidebars for each of your monitor (internal and external):

I just tried it on El Capitan but it works only on one space per monitor (which can be a huge limitation).

According to its home page, it is compatible until Sierra.

Many of these answers seem rather old, https://joshjon.github.io/nocturnal/ is one I've found that be up to date and also open source.

Features include dimming, night shift, and disabling the touch bar for the newer macs.

If you are doing a lot of typing, and not working with photos or videos, etc you could always use the color reversal trick. Just press control+option+⌘+8, and all the colors on the screen will be totally reversed. No more white screen; black instead. Much easier on the eyes.

I'd like to call attention to the f.lux program, which basically decreases brightness as it gets "toward bedtime" by removing blue light from the monitor. It helped me be able to see my screen at night without as much pain, since just removing the blue light has a dimming effect, and it kicks in at bed time which is when I need/want it most. You can also make it "dimmer" via flux menu -> preferences -> drag the top slider to the left more. It won't get totally black (kind of a washed out red'ish) but it will be dimmer which may be easier on the eyes, i.e. easy enough.

I also did find a free one that works with only one monitor ("Brightness Slider" on the app store).

rogerdpackrogerdpack
69822 gold badges1111 silver badges2222 bronze badges
1
Add a comment  |
0
Want to improve this post? Provide detailed answers to this question, including citations and an explanation of why your answer is correct. Answers without enough detail may be edited or deleted.

None of the apps got the screen totally black.

But using BOTH DO!

I only know how to lower the brightness at its lowest by the way you already mentioned on your post and just like you, it's not enough. My alternative when I work late at night is an app called Candlelight and I fairly enjoy it! It's not a free app but it's just about $1 to help your eyesight on the long run!

The best one that I've found, after a lot of searching, is Brightness Control:

It's really small, free, simple to use, and the only one that reduces the brightness of the mouse cursor.

Not the answer you're looking for? Browse other questions tagged display macos .