Why is the Apple logo upside down when the lid is open on the older Apple notebooks?

Why is the Apple logo upside down when the lid is open on the older Apple notebooks? 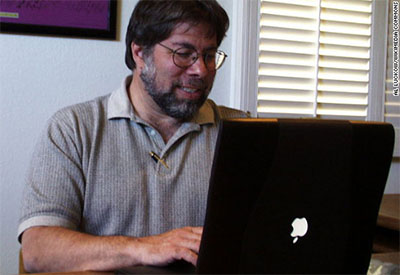 A former Apple employee, Joe Moreno has a blog post explaining why:

"We were told by the Apple design group, which takes human interface issues very seriously, that they had studied the placement of the logo and discovered a problem. If the Apple logo was placed such that it was right side up when the lid was opened then it ended up being upside down when the lid was closed, from the point of view of the user."

So when closed, it appeared right-side up from the point of view of the user. But when opened, it appeared upside down from the perspective of on-lookers. Joe Moreno states that "Opening a laptop from the wrong end is a self-correcting problem that only lasts for a few seconds. However, viewing the upside logo is a problem that lasts indefinitely."

All of these decisions of course went through Steve Jobs. With the release of the current Macbook product lines, Jobs reversed his decision and had the logo appear right-side up from on-looker's perspective.

The Upside Down Apple Logo: A Steve Jobs Mistake - http://www.cultofmac.com/168377/the-upside-down-apple-logo-a-steve-jobs-mistake/

Not the answer you're looking for? Browse other questions tagged macbook-pro powerbook .