Full screen ad on iPhone in place of lock screen

I own an iPhone 3GS and use it as personal hotspot for my MacBook Pro via USB.

The iPhone was in the locked mode and connected to the MacBook via USB when I pressed the lock button. However, instead of the usual lock screen and slide button, the iPhone showed a fullscreen ad: 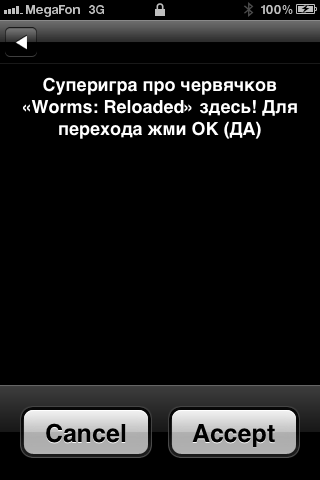 I was somewhat terrified by this so I didn't tap the image at all, and instead held the poweroff button. On choosing “Cancel” on poweroff confirmation screen, I was able to get back to my lock screen.

I don't know what would happen if I tapped the image, neither do I know if this was just an image or an executable. It's kind of funny that the ad says to push OK (YES) button, but there is no such button on the screen. I decided I don't trust this interface because of strange arrow positioning in the top left button so I didn't tap Cancel.

My phone is not jailbroken.

By the way, there has been a similar question without a screenshot but I'm not sure it is exactly the same thing.

My only guess now is that I have MMS enabled, and maybe there is a kind of MMS messages that show up on the screen without being saved (like flash SMS), and maybe my carrier decided to spam me. I'm also downloading a malware scan software for OS X.

I get these messages when I connect to the China Unicom network. I think the "Cancel/Accept" dialog is hardcoded into iOS for the purpose of accepting the carrier's terms of use. These messages come from the sim card, and I think only the carrier can send them. It's sleazy for the carrier to use this functionality for advertising.

It's a special type of SMS called a "Flash SMS" or "Class 0 SMS" (nothing to do with Adobe Flash), which doesn't get saved in your InBox and is deleted as soon as you Dismiss it.

This is quite strange. One thing's sure, that iPhone is definitely not locked. When you connect your iDevice to a computer, it'll usually start charging; it'll only lock when you actually lock it yourself.
I've also never seen this kind of MMS display. Based on the Cyrillic, however, what the carrier does may be different than where I am (these things vary from country to country, basically).
There's also the remote possibility that, through iOS's restrictions and security features, a virus slipped through.
Or, it could just be completely random.
Either way, try resetting your iPhone's settings, then post an update.

This is along shot but it coud be some sent you that image via bluetooth and the prompt is asking if you want to accept the image of not? You were in a crowded public place?

Not the answer you're looking for? Browse other questions tagged ios malware spam .